Tomb of the Rocketmen - AREA III - The Encysted Tomb

The ladder enclosed in the white ceremicrete tube leading from AREA IV or AREA V is divided by a small landing when it reaches this chamber, and an obvious exit hatch that is notable only for the large red star and skull stenciled onto it.  Close examination of this hatch will show small sweet smelling tendrils of slimy reddish mold creeping around its edges.

Entering from AREA II can only be accomplished by open the sealed and ‘tone locked’ hatch.  However there is 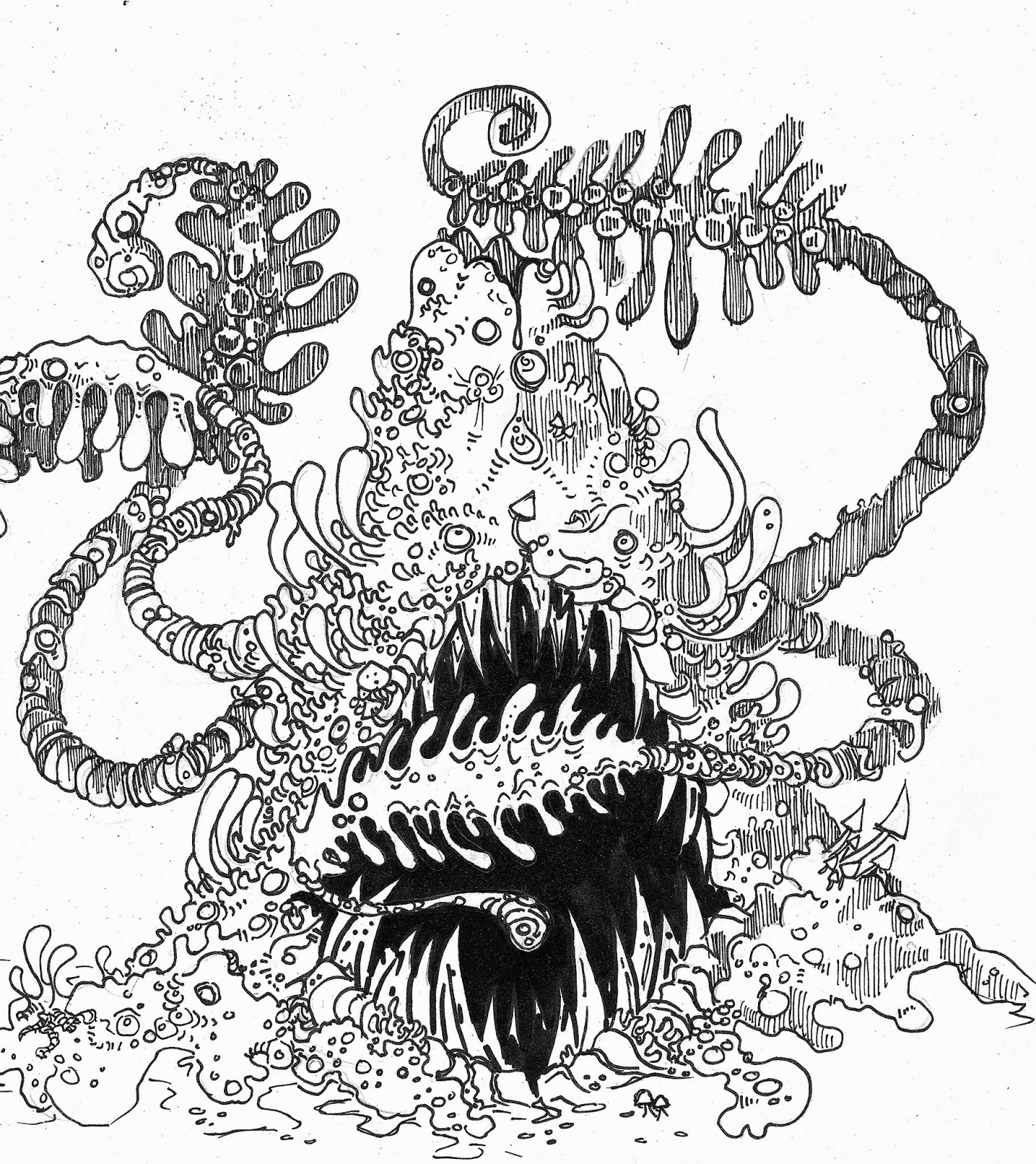 a large glowing green button next to this hatch on the AREA III side, which will open the sealed door is pressed.  The entire interior side of the hatch is covered with a thick bubbling mat of yellow and red fungal slime that, like the other fungus on the walls of this room, is highly toxic to the touch.

The chamber itself has lost all semblance of an artificial space and is completely covered in oozing red,  yellow and purple growths of spongy fungus.  Notably two huge lumps of fungus, with leg thick trailing tendrils mound up on the slick floor.  The first is near the hatch to AREA II and the second along the Northern curve of the room.  These large piles quiver occasionally and odd round orifices on them seem to open and close rhythmically.  Almost invisible beneath the pulsing layers of fungus it appears that the marble walls of the room once contained sealed niches (12 of them) widely spaced around the room.  Six of these niches appear to have been smashed open, and fragments of stained marble are scattered on the ground near them.

The massive fungal mounds are Mobile Growths , the stellar fungus’ defensive antibodies.  Concealed in the shattered niches are also six Space Zombies all of these creatures are well concealed by blankets of fungus and mold.  If not aggressively probed via something that can damage them (an arrow or spear) they will wait to attack until there prey is well within AREA III, and then do so with a 1-4 chance of surprise.  While attacking the zombies will seek to protect the mobile growths, but the fungal horrors have little strategy beyond luring their enemies into an ambush and overwhelming them unless the colony has greater knowledge of the party’s own tactics (see detailed description in New Monsters section).

Mobile Growth x2: HD 7, AC 5, ATK 5 (frond x4/mouth), DMG 1D8 x4*/3D6 MV 20’crawl, ML 12, SV F7, XP 1,190
Huge piles of predatory fungus, that will lay in ambush until they lash out with a writhing mass of ropey fronds.
*Targets of a Successful Frond attack (fronds have a range of 40’) must roll a contested strength against each frond they have been struck by (fronds individually have a Strength of 12, and each additional frond grants a +4 bonus).  Characters failing this roll will be subjected to automatic hits from the frond or fronds holding them the next round and if they fail to escape in the subsequent round will be subject to a devouring bite attack that does 6D6 damage.
** Has all normal plant/fungal immunities to poison and mind effecting spells.  Additionally Space fungus is immune to cold  damage and moist enough that fire does -1 point of damage per damage die.

Searchers of the Encysted Tomb must beware of that the fungal infestation here is extremely dangerous, constantly oozing a versatile and deadly poison that can kill from mere touch.  If any of the reddish fungus covering the walls of AREA III, including the layer blanketing the six remaining undisturbed tombs, is touched directly a save vs. poison is required to prevent a very unpleasant death within 1D4 turns. Using gloves or gauntlets to touch the fungus will give a +2 to this saving throw unless they are rubberized or otherwise optimized to prevent infection.  A character bashing through the thin layer of marble protecting each tomb with tools will also need to save vs. poison at a +2 as chips of the fungus and slime fly about (unless they are protecting their exposed skin in some significant manner.  The fungus is damp enough to be nearly immune to non-magical flame attack, but acid, oil, soap or lye will cause it to blacken and slough away from any surface as well as rendering it inert.

The tombs here are finer then the ones in AREA V the final rest of heroes and star saints of Rocket Men.  They were recently despoiled by a party of adventurers (See AREA IIIA) so only six of the tombs remain unlooted.  Opening the tombs will result in exposure to poisonous fungus, unless the looters take precautions, but other then the fungus, each is protected only by a thin marble slab that will shatter with a successful force doors check.  The content of the tombs are as follows.
Posted by Gus L at 2:22 PM

Email ThisBlogThis!Share to TwitterShare to FacebookShare to Pinterest
Labels: Tomb of the Rocketmen