The holidays bring plundering one's parent's basement for curios and curiosities.  I discovered three partial sets (Series I, II and maybe VI) of TSR's 1982 Monster Cards the other week.  These things were a strange play aid published during the bloated yet still magnificent early 80's days of TSR when D&D was really popular.

Each Deck consisted of 30 cards, about the size of an index card.  On the front was an image of a monster from one of the various monster books done in full color by various artists, and on the back was the stat-block of the monster depeicted on the front.  The monsters are all over the place, from goblins to Fiend Folio curiosities.  There were even some new monsters including the first appearance of the Thri-Kreen insect man.


These things are both largely a useless curiosity and pretty neat/evocative.  I can't help but think they were some kind of vanity project, as the sheer amount of full color illustrations can't have been cheap, and the cards themselves can't have sold that well as they largely duplicated stuff found other places.

I had them because they were on sale sometime in the mid-80's for a dollar a pack at the mall and my allowance stretched that far.  My folks were tolerant of my D&D playing, given that it got me to read and draw while keeping me quite - though they were a bit disconcerted about the tales of rampant murder and robbery it seemed to inspire. There is also something disturbing about a small child that knows the names of various types of medieval polearms, and can calculate THACO, but fails to know his times tables.  Still, I think my mom even liked these cards, because the illustrations are so evocative.

As a kid I played with them a lot, while I may have used them a few times in our games,  I mostly used them as a random monster device - setting my 'characters' against random foes by drawing a card from the deck in solo play (which really made trick monsters useless and generally was a dice game).

I've scanned a sample above, based entirely on how pretty they are.  As a kid I remember the Thri-Keen was a favorite, like the centaur, based mostly on the clean comic book anatomy drawing style and the sense of movement.  It's especially obvious in the Thri-Keen, with the ninja star (I mean how 80's awesome can you get), missing spear and angle of the sand dune set against the blue sky making a dynamic composition designed to be about as appealing to a 10 year old boy as possible.  Now I really like the displacer beast - Displacer Beasts and Bugbears being my favorite monsters these days, and the exaggerated drawing of the beast (like the stone giant) just gets me all nostalgic as it is about the lest anime/big shoulder armor style of drawing one could have. Again the colors add a lot and I appreciate that TSR had these done with completely new art rather than coloring the Monster Manual Drawings. 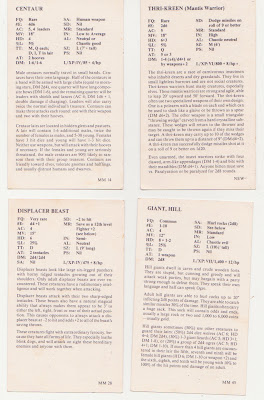 The back of the cards are pretty straight forward and appear to repeat the monster descriptions found in the manuals, but I like the format still.  I am not sure about the utility generally.  The picture on the front allows the GM to hold up a card and say "Moping around the burnt cottage you see 4 of these" but I don't know how useful that is.  The cards are also convenient for stacking up behind a GM screen, with the monsters one might use on hand.  On the other hand, the cards format is more space consuming than a simple entry on the page of a book and really offers nothing more to a GM with good notes.

I encourage someone with a successful kickstarter to offer a set of  these (even in black and white) as an add on, and think there are worse ways to present a monster than a picture the same size as the stats.  I may try to produce my own card in the future for something like a rust weird, sootikin or ghost armor form the Apollyon next time I feel the impluse - though in folding printable PDF format.

I may also offer these cards as a contest prize sometime soon.  Maybe even offer my copy of the OCE Whitebox as a prize if I feel really generous and don't auction it on EBAY.
Posted by Gus L at 2:30 PM