Below Are Current Rumors for the HMS APOLLYON Year of the Fallen Star and the month of Brown Crabs. 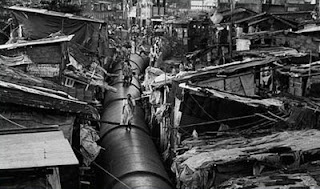 Within the oily smelling temple of the ship spirits, lit by the incense and candles at a hundred tiny altars, supplicants mill about under the wide glazed eyes of fanatical Ship Spirit Zealots.  Upon asking for an audience with the local priestess, Lady Stott, the adventurers are told that she is currently on the street of temples, pleading a case in the Central Shrine there.  Her crusade commander and factotum Brazen Gear will meet the party gladly and discuss the needs of the Spirits.
Gear is no longer the frightened drudge he was when the party healed him from the edge of death after a Merrowman ambush.  In the past year he has been filled with power by the Ship Spirits, and now overflows with their favor.  Still a smallish man, his scarred head seems tiny compared to both an extravagant beard and the heavy enameled bronze plate armor he habitually wears.

Gear is glad to see the party, especially as some of their efforts allowed his forces to break the siege of the so called ‘New Lands’ where the temple now rises in what was formerly a bloodstained chapel to the Cult of the Ravenous’ cannibal god.

1) Gear can offer the following leads on the undead menace beyond the buried vault.
The gate at the end of the vault cannot be forced, the Ship Spirit lay brothers and zealots have barricaded this side, as efforts to pass were met by revenants in decaying steam armor that slaughtered droves of soldiers with necromantic weapons before being driven back by the combined powers of Stott, Gear and a Brother Beedle (along with a circle of his fellow Priests of the Eternal Queen).  There may be a way around into the haunted village beyond, a central vault with quaint freestanding buildings and faux – wattle and daub cabin towers.  Likely the best bet is to go Port through the supply areas, but this is only Gear’s guess, perhaps going down or up and forward would work better?

2) He’s still interested in acquiring as many crew served weapons as possible – and will pay good money for them.  Gear and Stott even have authorization to trade ship relics for battle ready weapons.


Expeditions for the Unclean

A regular trade, or at least message service seems to be running between the Last Station where the bug like devil Malchris (lately styled rail baron) holds sway and the back gate of Sterntown.  The marine guards seem grim about the whole thing, but Malchris’ power certainly protects the Starboard flank of the sigil maze, and the devil seems content to no longer send probes of spider centaurs Port towards the Marine fortress.
As always Malchris greets the party with bug-eyed good cheer, chuckling and licking his lips when he sees Clerics amongst them.  Malchris has great need for brave souls – not just the souls either.  He would certainly be glad to fund the following exploratory or punitive expeditions and could offer limited support in the form of a protected armored train. 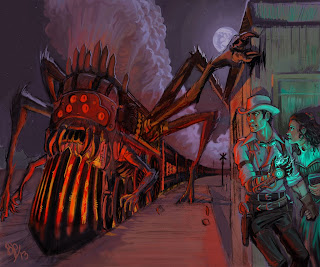 1) Punish the Ash Plague. Adventurers are complicit in this, and it seems the Ash Plague is lawyering and hedging about the agreement for upkeep and use rights on the spinal rail, claiming that their treaty prevents ‘living Sterntown humans’ form using the rail. Malchris insists he has not broken it – as no Sterntown humans, only otherworldly flotsam and froglings have used his trains.

The undead are rebuilding a bastion between Malchris’ tracks and the spinal rail itself, maybe cutting him off from trade with other Devil Lords and a certain family of exiles he hopes to marry his ‘grandson’ into. Destroy the Bastion, ‘kill’ it’s undead workers and engineers. Don’t let anyone know who you’re working for.

2)Chastise the Gold Teeth. Malchris has a longstanding feud with the Gold Teeth, another group of devils that control a rail station closer to the bow. They have recently built some sort of magical engine with spells and souls that Malchris insists they could only have gotten from demons. He wants this vehicle wrecked, derailed and smashed. It’s diabolic crew killed in some horrible way (he can’t settle on an exact means of revenge, and his mandibles clatter wildly when he speaks of this idea)

3) Follow the Map! Malchris has a map to the aft armory of the ancients – supposedly unopened since the first days of crisis. While the Apollyon’s rear battery is not of much use, the weapons within would allow Malchris freedom from fear – of the Ash Plague, of the Gold Teeth, of anyone who would “disturb the careful balance of peace in the stern”. Bring him back any Living Crystals, armored suits, power weapons and such that you happen to find – he’ll reward you beyond your dreams, with power that his kind is famous for providing – also wealth and magic if you still want it.

Malchris also has a spell for a certain benefactor and gives Semm the Priest of Lyris an ornate brass set of beads, each engraved with a rather tacky screaming bronze face. He says that should a sorcerer place the beads in their mouth one by one they will impart knowledge of a powerful enchantment. The taste may not be to most human’s liking, but it’s harmless enough.

Indeed they will – the 3rd Level Illusionist Spell – Inner Devils


Amongst the Exiles
The hulking bouncers at the doors of the Gilded Exile Burlesque House doff their matching bowlers to the party and even Bibi’s Merrowman giant “Pox on the Dead” nods a polite acknowledgement. Yet the flustered exile managing the front house of the exile, one of a changing cast of dapper individuals in ludicrous fashions, meekly informs the party that Mistress Bibi, their loyal friend, cannot meet today. She has taken ill, she is unavailable, indisposed and it is unclear when she will be able to meet them. He invites the party to stay a while and hands them each 100 GP worth of house credit as a gesture to show the Madam’s sadness at being unable to entertain some of her favorite people.

Looking around the little exile, his tuxedo slightly askew, and strangely supple looking (as if not made of cloth exactly), rushes back shortly. He must intrude he says, a “notable private party” would like to speak with the adventurers about a business proposition. Indeed Manu Stexx, assassin to the wealthy and important beckons from a curtained booth where he sits with a sad eyed young man in expensive black robes. Stexx is friendly to the party and asks if they would undertake a favor – one he could repay in coin or death.

1) Stexx’s Hunt. Stexx has been informed that the Cult of the ravenous is led by a creature known as the Faceless Queen. He would like to know her whereabouts. He has a debt to pay the Cult, one they will find dear. He asks that the party refrain from killing the Queen if they do find her – for sentimentalism and doomed love he claims. He appears a bit inebriated and his companion nods frequently before politely wishing the adventures a lovely evening.

Claws of the Underworld
Urchins, Frogling waifs still with vestigial tails, Flying Monkey pups with livid brands marking them as outcasts – all follow and dog the party in the last few days. Occasionally one will approach, kneeling deferentially and press a note into any outstretched hand. The notes are all the same, though the hand they are written in and the paper they are on varies from perfumed stationary of the Passenger class to the grey, stained and crumpled fragments of a fish seller’s wrappings.

While our own presence may be odious to you, I would ask that you reconsider in good faith our offer to share with you proper instruction in the acquisition and recovery of ancient artifacts. It is regretful that necessity has driven us apart, and whatever you may think of our fraternal organization please consider that all I do is to better the lot of those such as the youth who delivered this missive.

Think upon the squalid futures of the children my organization seeks to aid should your wounded pride prevent you from taking this step, ponder the distribution of resources in this place and consider not what I would do with the secrets to by pried form beyond the Maze, but what they would do with them. What new outrages and emboldened cruelty that unchecked those in the eves of our town might concoct if they no longer feared the wrath of the men and women who have marked themselves out to stand upright.

If you require edification of wish to reconsider my offer please speak to a certain man of leisure named Charlie Ogg, who currently lodges at the Petit Gris, a home for upright living.