Some Maps (and thoughts on map fill)

I was recently happy to get a very flattering comment from Dyson Logos of regarding one of my maps, which got me thinking about Dyson and his maps.  I've always really enjoyed them, they're clean and interesting (especially the way passages cross over each other and they possess a three dimensionality while remaining one level). What I really got to thinking about, because I like drawing maps, is Dyson's crosshatching technique, which even if you have no idea who I'm talking about you will recognize, because almost every map I see (mine included) is using it.

By crosshatching technique I mean the way the one fills space, specifically the space on a map filled with rock, earth or anything else more or less impenetrable. I've been stealing Dyson's great crosshatching, and I want to look into other space filling techniques for maps, because though it's filler, crosshatching adds a lot of character to a map and the character it adds tends to be one of the things that differentiates hand drawn maps from computer drawn.

Here are two filler techniques I thought up yesterday night and have applied to these small temples of evil.

Beneath a stretch of rocky ground and accessed by a narrow stair set within a square pillar in the middle of nowhere, this abandoned temple to a deity of justice gone nasty and draconian served as a prison, ritual torture center and place of sacrificial execution.

It is undoubtedly haunted by the spirits of the victims, but could be used as a lair by just about anything/anyone who doesn't mind grim utilitarian decor designed to inspire hopelessness.  Prison areas are to the North with drainage pits (certainly also filled with bones), a torture theater and a well. To the South is the ritual chamber and quarters for the Carnifex priests.

The fill pattern I used here has a nice effect and is easier than cross hatching, but it is rather time consuming.  I also think it might work better for a map with rounder rooms as smaller spaces can blend into the block fill.  Of course using thick black walls helps keep the negative and positive space separated. 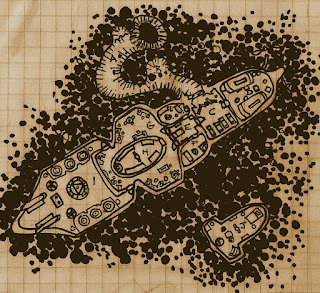 THE TEMPLE OF THE KRAKEN

Buried beneath the salt pan of an ancient dried lake, or the mud of a shallow marsh a sink hole leads to this ancient submersible.  A science-fantasy map depicting a crude temple to some sort of tentacled star god built into the ruins of an advanced technological craft.  The guardians reside in the aft, while the head priest or magician has luxurious quarters in the conning tower.  The temple itself is built in the missile and torpedo room amongst decaying weapons of mass destruction.

I would drop this thing into the Livid Fens South of Denethix in a second packing it with zombie drummers and poison wielding fanatical tribesmen.

This fill worked rather will, it's simply stippling in a more traditional way using a large, blunt sharpie. It's quicker than crosshatching and seems useful on maps with a lot of open space as where a decayed or organic feeling might be useful.