Fetid Pit - The Pit and it's History 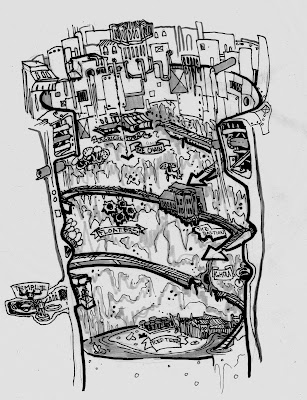 Inaugural Post in my effort to produce an HMS APOLLYON location.  The Pit has been play-tested by Bumphrey the Mole Man's birthday expedition, and successfully navigated, despite some close calls (closer than the players know).  In writing it up (as evident from the Title Page posted concurrently with this Introduction), I intend to partially eschew the traditional keyed locations technique of dungeon design and use a Monster list, and random table system to generate encounters, treasures and interesting rooms (or tableaux) for descent into the pit as a whole, while keying areas such as the Agricultural Station, Bastion and Angler Fish Holes.

The Fetid Pit is a great air shaft leading from the weather deck of the Apollyon, deep into the vessel's holds. Air shafts are common on the upper decks, but only a few great shafts reach as deep as the Pit. Philosophers and architectural augers suspect that the Fetid Pit is in fact one of only eight such deep shafts, arranged in pairs along the entire length of the worldship.  Indeed the Pit is over three hundred feet across and thousands of feet deep, running at least to Deck 14, a region known to be flooded before halting at what is presumed to be a a sealed hatch. The Pit makes a poor access shaft to the upper reaches of the ship, as for the first several hundred feet it is frequently blocked by gigantic ventilation blades that slowly rotate turning what little light reaches right hundred feet into the shaft gray and dappled.  Additionally the upper shaft is known to be home to colonies of giant predatory pigeons, Merrow Men, wind elementals, automatons and at least one outsider noble and its entourage.


The entrance closest to civilized holdings is located on Deck 8, starboard of the Promenade.  the pit forms a natural defensive point, and Sterntown has managed to take advantage of the air the flows from above while heavily fortifying the Port side rim of the Fetid Pit with a series of Steward manned towers, bunkers and blockhouses. The pit did not always represent a bulwark against encroaching darkness.  One hundred years ago there were agricultural stations, using the light and damp of the Pit to producing abundant food mushrooms and even some fruits and vegetables, where mirror apparatus could focus enough light to make such luxuries grow.  In the centuries before that the long stair supposedly winding down the side of the pit was a busy trade route between Sterntown (then a sleepy farming and fishing community) and the Black Gangs fabled factory city.  The entire walls of the pit were once fecund with food plants and terraced into a vertical parkland, with caravans of traders winding up and down the stairs.  Some remnants of these days undoubtedly remain, fragments of lost plenty amidst the festering slime and corroded that fall away towards the murky depth of the vessel.  Now and for most of living memory the fetid Pit has been a dump, a place to pitch the useless waste, and most vile trash of Sterntown so that it drops soundlessly from memory.  The Vory are said to use it to dispose of bodies, and the Stewards rumored to exile those they cannot kill but wish to torment into the Pit, or worse keep them trapped in cages dangling over its vastness, prey to the swarms of insects and predatory fungus that thrive in the Pit's wet environment.