"Here, organic towers, tall shapeless masses of tissue cultured from the plasm of ancient mammals, trumpeted and moaned across the abandoned wastes of another continent, their huge cynical voices modulating on the wind, now immensely distant, now close at hand. Natural philosophy, they maintained (holding him to be in heresy), is a betrayal of invention. It is an edifice of clay. It was always night there. . . ." 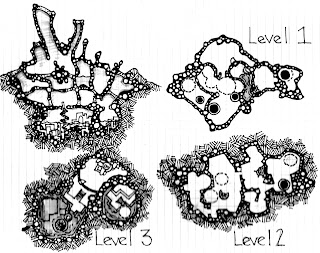 Mentioned these in passing a couple posts ago, here's a map for a set of fleshy towers, raised cankering up from the ground, and singing their unknown creators' dirge as the wind howls through the slowly dilating and clenching orifices that mark the towers as formed from living material rather than the brown and gray dust that surrounds them.

Around the towers roam all manner of scavenger and strange beast.  Some may be creations of the tower's builders and marked by the same lost arts, others are representatives of mundane creatures adapted to survive in the blasted fleshy wastes that surround the towers, where what first appears to be plant life proves to be some sort of strange organ growing bodiless from the rotted earth.

At the roots of the bruised towers are stagnant pits of water flecked with blind sluglike fish things and the submerged remains of ancient machines.  Is the tower home to debased servitors, an unfathomably insane machine lich, terrible demons of transformation or only corrupted prospectors? No explorers have ever returned, so whatever of these absurd claims the barflies and crippled salt diggers in the nearest buried town, drinking grub squeezings in a stinking burrow of the only bar are speculation and fancy.  So inebriated and degenerate are the nearest locales that they don't even know the name of the world they reside upon.  Some call it Arthas, others The Land of One Thousand Towers, and a few dread Carcosa. 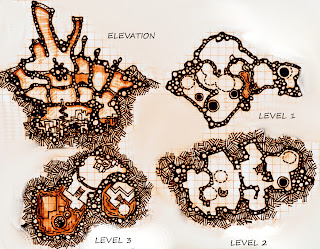 Map is done in the standard "OSR style" without my personal colorization touches and making an effort to remove the squares. Not sure how I like it, but it's worth a try.  It's likely about two or three sessions of play and would benefit from a random table for the contents of the fleshy cenotes that surround the towers.  The actual location is somewhere under ten locations.

"Color" map quickly fidgeted with to remove unnecessary lines provide a bit of shading and relabel the elevation map to make things a bit clearer - also rescanned because of some blur on the lower left.
Posted by Gus L at 7:24 PM