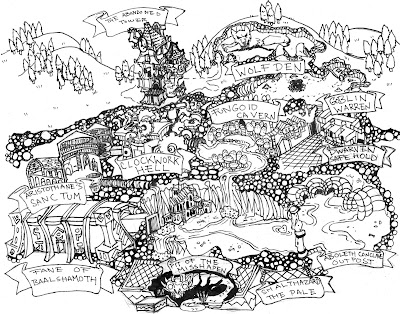 Every Megadungeon needs a novelty tourist map.  Here's an attempt at one for Keith's "Nodal Megadungeon" which I've spoken about recently.  I'm not sure the map is helpful, but it took a while to doodle and while it lacks useful information it gives some feel and a sense of location at least - not that Keith's flowcharts didn't do an equally good or better job, but this has a doodles involved.  It's the least I can do to support Keith's great project.

Ultimately it ended up a tourist map like the ones you get for major cities which at best give a vague idea of where neighborhoods are located. I'm tempted to do one for the Apollyon and ASE...
Posted by Gus L at 11:18 PM