In the next few days or weeks, I'll be putting the final touches on a large adventure (around 40 pages or so) that is a follow up to The Prison of the Hated Pretender.  Not a direct sequel to the previous adventure, but something that references the same ancient despotism and events.  The Dread Machine will focus on the exploration of an ancient valley, containing a decaying machine of great power and evil.  Two keyed locations and several cites to explore, including the Machine itself.  It's designed for adventurer's 3rd-6th level and should offer some interesting challenges.  All new monsters, magic items and numerous traps, but with an effort to create something that can be dropped into an existing campaign world without deforming it. 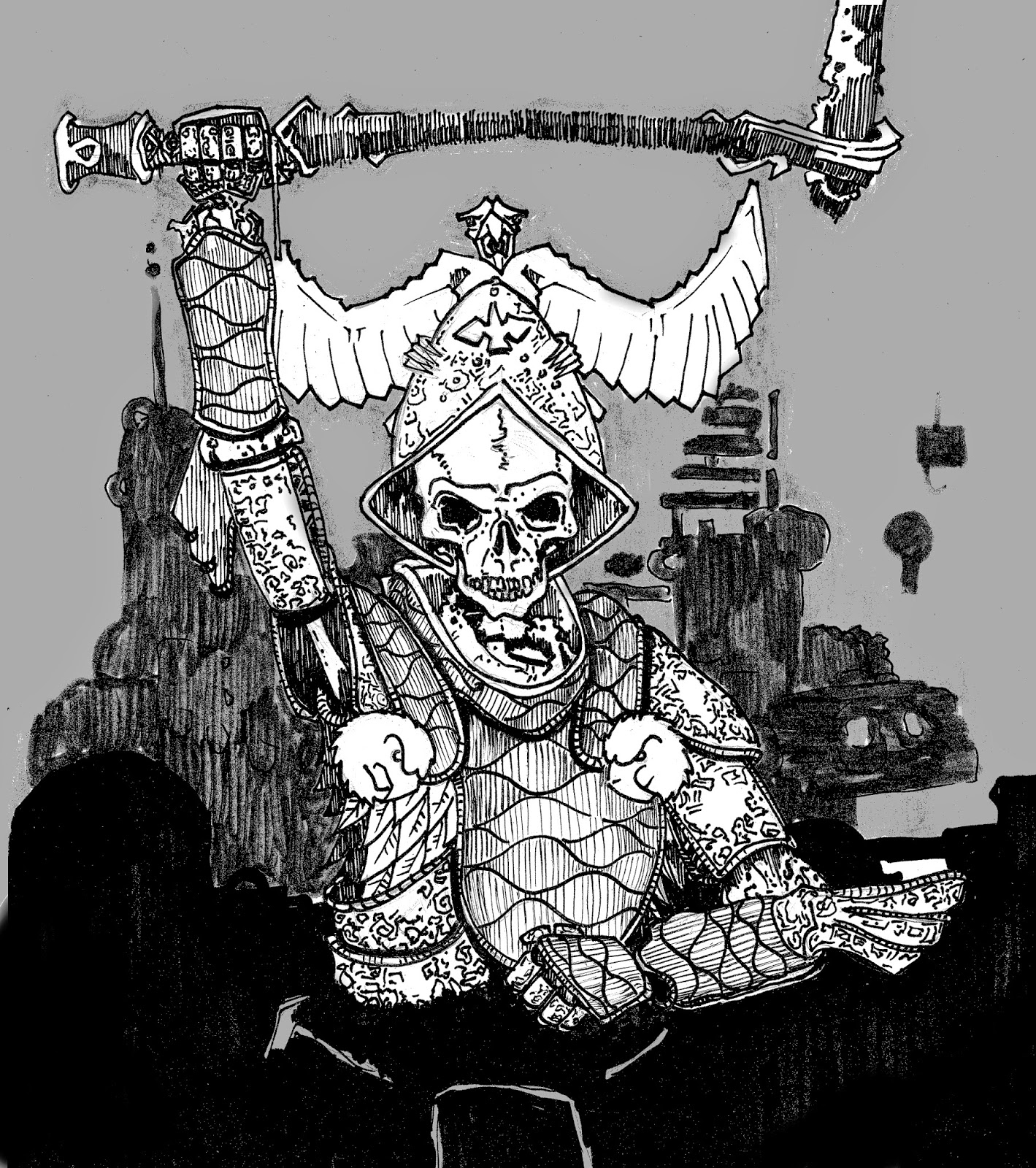 Adventurers die, and usually in hideous ways, but the optimism, entitlement and overweening self-importance that often drives individuals towards delving in ancient tombs and battling horrible monsters also means that few Adventurers will easily accept the finality of death.  When one of their companions predictably dies to the horrors of some pit best left untrodden adventurers will seek for ways to transcend mortality and cheat death. Returning a comrade to life is not an easy task. Certain deities, and even their most powerful instruments, can sometimes claw a mortal back from death’s sweet arms, but few adventuring types are in good graces with the gods, and fewer wish to owe the debts associated with divine grace. To these desperate souls many a sage has an answer, and that answer is often the lost Ziggurat of the Pretender, an artifact, machine or perhaps a building created by a forgotten and hated despot in some antediluvian eon.   Pinpointing the whereabouts of this wondrous edifice is expensive, and details sketchy, but one thing that the overpaid sage will assure his or her clients is that this device allows resurrection of the dead.

The valley isn’t lost, it’s worthless, cursed and shunned.  Any of the slow moving, worn out dirt farmers for fifty miles can tell you where the valley is, as they make various signs to ward off evil, sorcery, madness and death. It was finding these plains of yellow dirt that was hard, a place forgotten and overlooked.  The plains are almost free of resources but teeming with abandoned, sullen, cheerless clans of cruel, cannibal folk.  There is nothing to trade for here, nothing to plunder, and no opportunities to draw the men of civilization.  Yet, according to the sage, within a rotten valley that boils from the yellow and rust scrub lands, too poor for even the tireless and moronic dwellers of these parts to farm, is the Autocrat’s Tear, a puckered chancre filled with ancient puissance capable of returning life.

A metal cube 80’ by 80’ covered in gears, pistons and jutting devices of unknown use, a doorway in its Southern face spilling a weak internal light, white and cold, onto the cavern floor.  Trickles of lubricant, oil and other industrial discharge leak from ancient pipe fittings and run in unnaturally bright rivulets across the rocky ground. The upper level of the object appears to largely consist of an angled set of four huge pistons, all closed.
The interior of the cube is similar to its exterior, a mad jumble of pipes, plates, dials, gears and pistons that overwhelms the eye, with hallways and chambers that appear to have been tunneled out of the mechanical bulk.  The halls are between 10’ and 6’ wide where jutting machinery limits passage.  The floor is made of either sturdy metal mesh grates, revealing more pipes and devices beneath, or riveted metal plates of steel, bronze or iron.  Ceiling varies in height depending on the number of conduits and devices in a particular area of hall, but is never less than 7’.

This is one of the artifacts used by an ancient despot to control his empire.  It is powered by sacrificed souls and energy siphoned from beyond the veil of reality.  Built partially with the Despots sorcerous skills and partially with material and knowledge of enslaved otherworldly entities, the machine can, extend life, reverse death, create ablife and grant a form of immortality.  The alien technology used in its creation is that of the domain of the machine intelligences of the bronze ziggurat, a plane of perfect, horrible order and merciless calculating rationality. 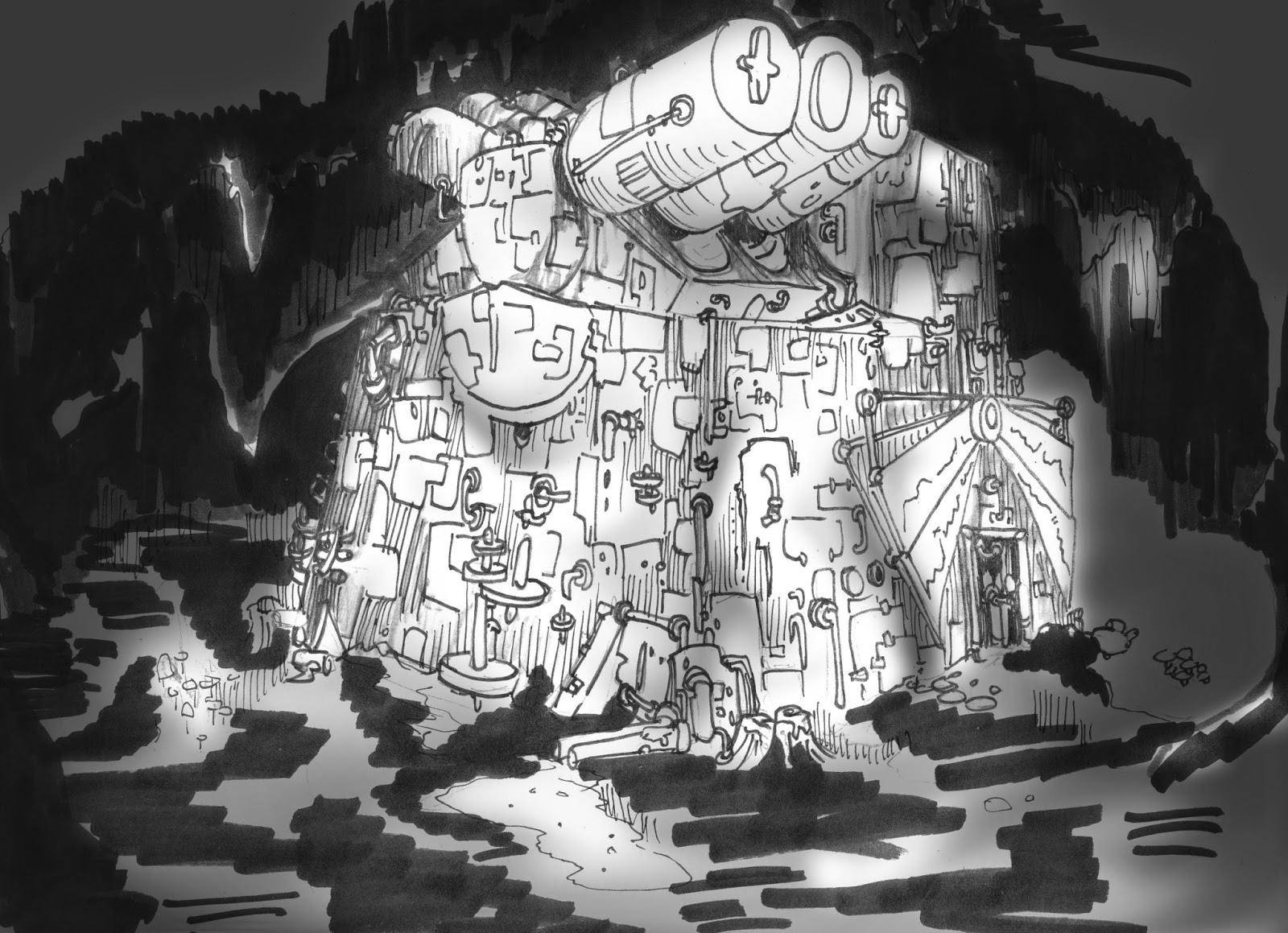 The Legion Breaker
Carved or forged from a single piece of unnatural purple black steel, this item consists of a heavy 8’ long chain of hexagonal links topped with a melon sized hollow polyhedral cage decorated with ornate ridges and patterned engravings.  The exact number of sides will appear different upon each viewing.

When incense is burned in the censer, it will fill a room up to 50’ x 50’ with thick purple smoke that creates an area of magical order, preventing demons and similar outsider entities of chaos from entering and making other chaotic creatures uncomfortable.

As a weapon the Legion Breaker is a magical blunt two-handed weapon, capable of doing 1D10 points of damage and striking at +1 to hit.  If wielded by a cleric in the service of a non-chaotic deity or power it will burn with a pale purple fire when used in combat. On a natural to hit roll of 17 or better (assuming the attack hits) the weapons flames will spread to the target doing an additional 1D4 points of damage, and burning for 1 point of damage per round for the next 4 rounds.

Balancing Shrine – the creation and maintenance of this shrine to mechanical perfection is a strange act of worship, still performed by the Wire Ghasts as they intermittently repair and clean the machine - it is also a trap.  Disturbing the balance of the shrine will cause it to collapse, dropping an 8’ pile of machine scrap onto whatever is within 10’ of the front of the shrine.  This collapse will do 2D6 points of damage to anyone caught in the deluge, but a Save vs. Paralysis will allow a victim to cower for half damage.  Worse, the balanced objects in the shrine itself are connected to a series of heavy pipes and beams concealed in the ceiling of the entire hallway (magical searching, or a detect traps success in the hallway will reveal loose pipes in the ceiling).  When the shrine collapses, the entire carefully arranged mass will come clattering down, subjecting anyone in the hallway to 1D4+1 attacks by the equivalent of a 3HD monster.  Each attack that lands represents pieces of piping or other mechanical debris that will strike for 1D6 points of damage.  Triggering this trap makes a great deal of noise and requires three immediate wandering monster check to see if 1D6 Wire Ghasts (for each positive result) are attracted to the noise.

The altar need not be disturbed to trigger the trap as loud noises have a 2 in 6 chance of causing the collapse, as does disturbing the hall’s ceiling pipes.  The golden cylinder may be removed by very careful manipulation of the shrine elements, requiring five successful checks on a D20 under various attributes to succeed.  Upon each attempt to manipulate or disassemble the shrine roll 1D6, on a 1-2 a Wisdom check is needed, on 3-4 an Intelligence check and on 5-6 Dexterity.  Any failed check will result in the collapse of the shrine.  Disassembling the shrine entirely will take ten ability checks but will trigger the hallway ceiling portion of the trap when completed. The best way disarm the trap is to tie a thin cord to a piece of the shrine, requiring an ability check, and taking it out of the area to use as a trigger. 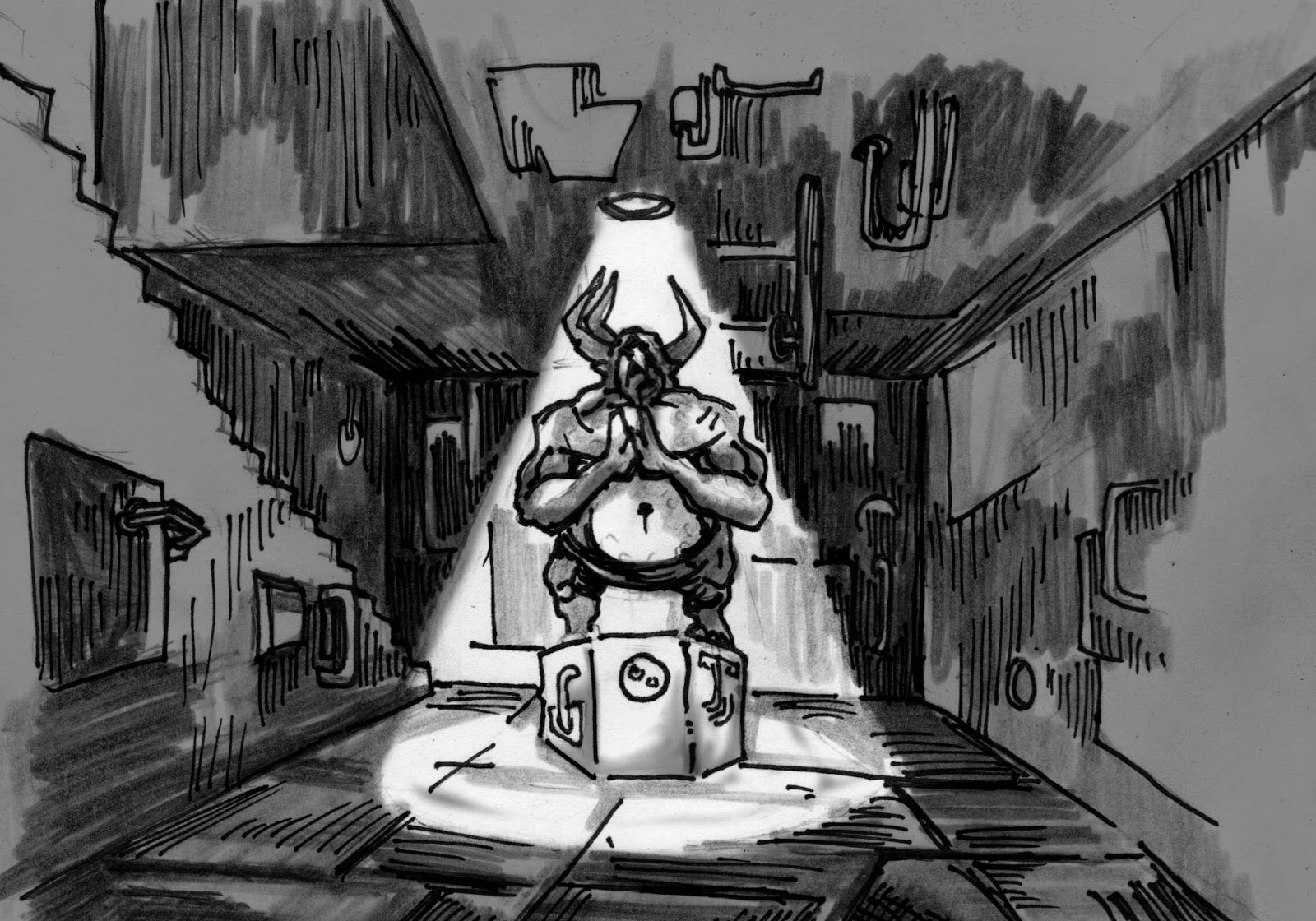 
Fractal Slurry A blob of brightly colored orange and brown sludge, constantly flowing into crystalline shapes. The creature transforms metallic items into additional fractal slurry and can kill with its jagged form, and while not hungry for flesh, is quite territorial.