Meditations on the Bugbear

Bugbears – I have always loved the name bugbear, ever since one of them pretended to be friendly to my trusting 9yr old D&D player self and under the guise of offering me some kebab shoved a red hot skewer into my 2nd level fighter's face. This was my first real experience with betrayal (and they say D&D doesn't teach kids anything). Much fun was had in the Cave of Chaos that day – my only regrets at the time were that the crazy fighter in the basement turned evils, and that I there weren't any baby bugbears to slay! Still, it's amazing, my initial impression of bugbear as potentially friendly cute creatures - something like a cheerful Chewbacca with a bee head - was destroyed almost as soon as it was formed.

The point of that touching tale, is that I have never known what a bugbear might look like (well as noted below there's that proto-soviet revolutionary kind I learned about in undergrad....) but the name was just so evocative! I think the image used in the 1st Monster Manual is excellent (look it up), is pretty good, it also appears to have been cribbed from a revolutionary Russian zine of the 1905 – 1914 era. There's history in the monster, excellent history. Yet, despite it's storied nature, all I know about the damn things is as follows: Bugbears are betraying murderous bastards, bugbears have a lot of hp, bugbears are what goblins use to collect gambling debts, bugbear are hairy and likely smell, bugbears are dumb but make up for it in evil cunning, and Bugbears are fond of polearms.

Of course around Denethix the idea of a hairy giant goblin is not adequately bizarre. Plus I've always thought that a 'bugbear' should be at least one of those things – bug or bear. For a giant hairy goblin, it's possible that the hive minds have been breeding Sasquatches with their root servitor stock (are goblins purebred hive-mind stock, or are they the 'hiveminder' equivilent of Morlocks?), but I don't like that for bugbear. A bugbear is what a hivesquatch is not. I see a hivesquatch as having 6-10hd, AC 4 and being 12' tall – like a goblin hill giant. A terror that can't be made outside a lab and needs a whole sasquatch tribe's worth of pineal glads to grow in it's tube. Hivesquatches are what the oldest hive minds, backed by steam-powered reconstructed alien tech, pull out when they descend on human lands and need something to smash a few steel leviathans – hivesquatches may also be immune to magic and certainly only show up with 1d6 hundred goblins in support.


Bugbears though – this is a bugbear.... 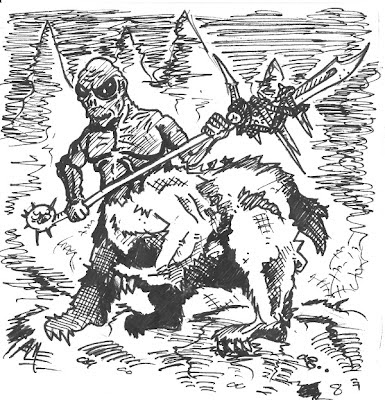 
A monstrous hybrid between a goblin and a black bear, both of these beasts' antecedents benefit from the genetic splicing. Bugbears are smarter than bears and much stronger than goblins, though they are also weaker than bears and likely less intelligent than goblins. The bugbear resembles a black bear in size and appearance, except an over-sized, over-muscled goblin torso grows from what would be the bear's neck. These creatures are sometimes described as “ursa-taurs”, but their goblin heritage makes them far too alien for such a pretentious nomenclature to stick outside scientific circles. A bugbear is a bear, but with a bug's six limbs and locust like mentality – hence to most they are “bugbears” or rustically “loco-bears”

Bugbears are often found amongst successful tribes of forest dwelling goblins, and it's reasoned that they sometimes spring from especially well-fed goblin spawn-sacks that receive indirect sunlight and regular water. Cruder theories involve anatomically impossible congress between a goblin and a she-bear. Regardless of origin, bugbears are never found without goblins, and the presence of even one bugbear encourages goblins to acts of courage and bravery. Every bugbear encountered will have 1D10 goblins following it, and there is a higher than average chance (20%) that one of those goblins will be a shaman capable of ritual counter-magic against 1st level Magic User spells known by the shaman (usually goblins know only offensive spells especially sleep, magic missile and burning hands) but otherwise a normal goblin. A bugbear's goblin followers will have a morale of 9 while the bugbear fights on, encouraging the goblins with bestial roars. If their bugbear leader/god/totem/muscle is slain the goblin followers must immediately roll twice to check morale at the usual value (7).

Bugbears attack with two swipes of their bear forelegs (as a black bear), and either a vicious bite or more often with a weapon at +1 damage due to their ursine strength. Bugbears display a fondness for over-sized and bizarrely augmented pole arms (and will make their weapon attack last in a round when wielding such, but for 1D10+1 damage). It is rumored that the bugbear slaves of the most advanced hive minds sometimes wield glowing green manifold axes and have thick steel plates (AC 3) fused into their flesh.
Posted by Gus L at 2:04 PM