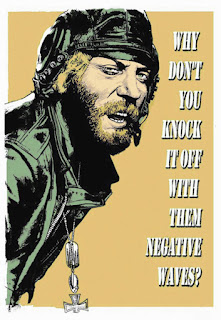 I haven't been posting about ASE much lately as my home campaign seems to be winding down as real life intrudes for my players and I play more myself in Pavelorn and Wampus County.  The party has wiped out almost all life in the first level of the ASE (which they out-leveled drastically), and since ASE II isn't out yet, I enlisted the party in a penal battalion of the local enlightened despot's army/guards using their legal troubles as a pretext. After an initial period of annoyance they've had quite a good time and discovered that the war provides opportunities for skilled treasure hunters with limited scruples.

My plan is to turn the pair of adventures I ran for the home party of Huxley, Drusilla, Grimgrim, Lemon and Nell into an adventure along the lines of the Obelisk.  It's less a dungeon crawl and more a hex crawl with a small set battle at the end.  The model for the romp is the excellent 1970's farce/heist/war movie "Kelly's Heroes" - which I know has been discussed before as a basis for an adventure - but seems especially appropriate to ASE's gonzo sensibilities.  Additionally, it becomes homage and not appropriation when I have a dysfunctional robotic tank (a "Steel Leviathan") that says "Why don't you knock it off with them negative waves" (and takes combat penalties each time there is table bickering).

Denethix -Triceratops Butcher for the world, Tool Maker, Stacker of Nutritional Algae, Player with Rayguns...  The city of Denethix is the economic (and possibly military) colossus of the land of a Thousand Towers but its growing industries have an insatiable demand for raw materials and Denethix's political and military elite provide them, seeking direct control where possible and negotiating trade where invasion is too costly or logistically impossible.

The Certopsian Plains - The jewel of Denethix's commercial crown is the control of the Western Certopsian plains and an almost infinite source of hides, meat, grain and rare earths that Denethix profits enormously from and that allow the growth of its population and industry.  The Fist and rancher barons supported and supplied by Denethix have established a loose but strong grip on the Western Certopsian and its great herds of bison, protoceratops and triceratops that has not wavered in the last decade.  recent developments include the further co-option and destruction of many of the native Moktar bands, establishment of permanent towns, including mining and farming communities of some size and the beginnings of a rail industry (sail and animal powered only so far). Despite it's importance, the size and low intensity of the conflict in the Certopsian means that Denethix's forces in the region are scattered and not sufficiently strong individually to hold of a determined attack, intended to provide a nucleus for local militias made up of various rancher barons and their retinue of gauchos.

The Deep Plains Nomads and Assyrian the Wizard - The nomads of the Deep Plains are a human people, but apart from the normal affairs of the Thousand Towers.  The nomads exist in the badlands between the Certopsian and the Lanthadie Wastes and have remained outside the control, and possibly even notice, of wizards or Denethix.  The nomads have always been a warlike, but non-aggressive people, content to stay in their lonely wasteland, oblivious to the larger world, following their scattered dinosaur herds and only molesting those who come into their range.

Within the last couple years things have changed amongst the nomads and they have begun mounting raids, far from thier homes and increasingly it appears with the intent to wage a war of conquest against Denethix's Certopsian holdings.  More disturbingly the Nomads seem to have changed themselves, includign many strange mutants and mutated dinosaurs amongst their weapons and sometimes led by snake-like men of alien appearance.

Like most dangers in the Land of Thousand Towers the reason for this new menace is a wizard, specifically the wizard/ancient snakeman intelligence Assyrian who has risen to power and united the scattered nomads.  Assyrian began as a simple nomad, invaded by a subtle and ancient entity when he chose to rest his herd amongst the ruins of a snakeman tomb.  The creature now inhabiting him, and directing the nomadic dinosaur armies that he commands, is alien beyond all comprehension and powerful enough to transform both man and dinosaur in chthonic monstrosities.

The Junction Town Raid and Fist Response - A heavy nomadic force, including several howdah topped reptilian behemoths recently overran and held the Fist fortification and town of Junction in the South Central Certopsian.  The action has changed the war and created the first static front between the Nomads and the Unyielding Fist.  Denethix's response has been vigorous as Junction represents a strategic choke point, where the bluff between the high and low Certopsian plains is broken by a series of passes.

Denethix currently has a army known as the 3rd Expeditionary Force located about 25 miles South of Junction.  The Force is a bit of tumbled together unit, made up of mercenaries, a penal battalions, loyal cult forces and regional militia with only a scattering of regulars.  Some heavy units support the Force, including a large artillery battery of modern guns manned by a crew of scientists and a small force of Steel Leviathans backed by several squads of fist infantry.

The Players - The 1st - 5th level characters are a small reconnaissance team (somehow cajoled into Denethix's military or paramilitary) who are assigned to seemingly random patrols and pointless tasks by a feckless commander.  On a mission to "Find a decent decorative birdbath - and try to establish a perimeter" they will encounter a dying Nomad dispatch rider carrying documents that prove the existence of a stash of 100,000 GP in gold (that's 10,000 lbs in an about an 8 ft cube).  No character should be able to resist this lure, but the documents make it clear that the gold is in an abandoned pleasure dome on the bluffs 40 miles away and guarded by a crack force of snake men too large for the party to handle alone.

In order to claim the wealth, the players will need to amass a larger force, cajole it across forty miles of rough terrain beyond the enemy lines and then seize the treasure from a force that includes two giant mutated triceratops, 100 nomads and 50 snakemen.

I'm kind of excited about the possibilities of this adventure locale as I get to play with squad size combat, randomized hex crawling and  mutated dinosaurs as tanks.