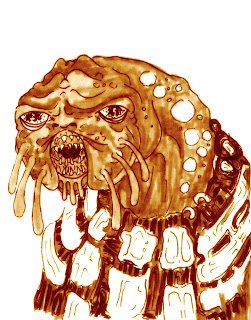 No Enc. 2-12 (22 - 220)
Movement: (40')/40' Swim
Armorclass: 5
Hit Dice: 1+1 HD
Attacks:1
Damage: 1D6 + Special
Save: F1
Morale: 10
Hoard Class: IV/XXI
XP: 21
Merrow Men are small, generally about 4.5' tall, humanoids, appearing much like eels with arms, legs and vaguely human features.  They are amphibious and while Merrow Men primarily live on land they must immerse themselves in water for a few hours a day to avoid drying out.  Merrow Men are fairly intelligent, but most only speak their own language as they tend to be private and clannish.  Their encounters with humans invariably turn to conflict as Merrow Men have volatile tempers.

Their tribes can number from a couple dozen to several hundred, clustered in huts, rubble clogged gangways or building within the vaults fortified for use, but always around a source of water as they require a great deal of it for themselves and their flesh-crafting industry.  Perhaps because they establish fixed abodes, Merrow Man tribes are security conscious and will use concealed entrances, traps, alarms and hidden guard-posts/ambushes to their full advantage. Within the center of their lair Merrow Men will often grown mushrooms or edible aquatic plants, but what distinguishes a Merrow Man lair is a separate chamber where the creatures grow and manufacture objects from living flesh and bone through the use of strange life magic. Female Merrow Men tend this living slurry and do much of the crafting, and so this pit will always be the most fiercely defended area in a Merrow Man lair.

The majority of Merrow Man equipment is molded from magically shaped living tissue.  Armor made of muscle sheathed bone and weapons like jawbones with living teeth that will grow back if broken.  This strange equipment is formed with another of the Merrow Men's peculiar weapons, a greenish mutagenic slime that causes injury and random flesh growth when it strikes most living things.  Merrow Men will fling flasks of the slime at intruders and it causes 1D6 points of damage on a successful strike, eating skin like acid,  but if a save vs. poison is not made it will also cause a random mutation of some kind.  Most of these mutations are harmful and permanent, but relatively minor, however; if enough slime is applied to a living creature it will eventually become a pile of amorphous flesh random bones and organs, perfect for the Merrow Men's living slurry and ready to be molded into living equipment.

Merrow Men equipment, despite its magical nature, is rarely better than that made from more normal manufacturing processes.  Occasionally the Merrow Men will make items of considerable power, though these will always be held by their leaders. There is a great deal of variation among Merrow Men, with specimens that are cable of shamanistic and life magic use, and other warrior Merrow Men that grow up to 8' tall with up to 6HD.  There is almost always a warrior sub-caste in a Merrowman lair, individuals of normal human size, wearing thicker and better flesh armor and with 2 or more HD each.

Merrow Men are not native to the Apollyon, or at least not a product of it, but are instead the offspring (at least originally) of humans and Merrows, large mermaid liek creatures of great magical power and evil intent.  Some Merrow Man tribes will be in the active service of a Merrow matriarch who they will regard as a deity.  Since Merrow Men breed true this is only rarely the case however.

Below is the table for effects caused by Merrow Man flesh shaping goo.