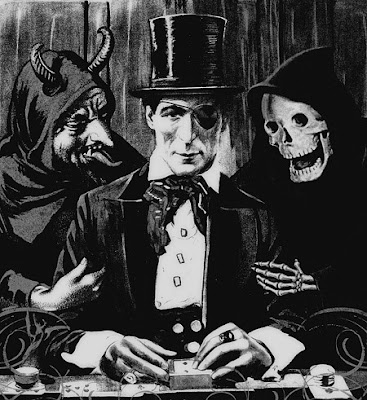 Aboard the HMS Apollyon, the hereditary ruling class is known as the 1st Class Passengers, Uptowners (though not all Uptowners are strictly 1st class), or simply the Passenger Class. They are a decadent and cruel race, having tyrannized the Apollyon's human population for hundreds of generations and watched it decline, struggle, and fail. The Passengers still affect the veneer of the civilization that their distant ancestors left behind, a mannered society of politeness, protocol and duty, but one where even the most mundane domestic rituals have mutated into stylized performances. The passenger class is stereotypically made up of sorcerers who deal with sinister otherworldly forces and to a large extent this is true as even the most mundane Passengers have some magical ability due to a history interbreeding with otherworldy “outsider” entities.
The passenger class differs both physically and mentally from the crew class for a variety of reasons. Historically the first members of the passenger class were made up of the most educated and magically inclined of their world, and sorcery has a genetic component. Secondly, most of the non-sorcerer members of the passenger class either died in the riots and unrest shortly after the HMS Apollyon was lost ("The Great Marooning" or the "Orchid War"), or joined the Marines (and Stewards) out of a sense of duty.

The remaining nucleus of sorcerers discovered that their relatively innocuous academic thaumaturgy was no match for the challenges they faced. First, out of largely altruistic motives, the passengers turned to necromancy, but when this path failed catastrophically they embraced to the magical discipline of "Hospesmancy": summoning, control and alliance with creatures form other realities. It quickly became apparent to the Passenger Class summoners that the easiest entities to reach and among the most reliable were the Shaitan of Baator (commonly known as Devils), who despite their brutal cruelty are orderly and hierarchical, abiding by the letter of deals they make. Additionally it appears that the Shaitan hate the Plague Kings and Queens of steerage, and the Fishman god Nyarlathotep almost as much as the humans of Sterntown do. Not all Passenger families have aligned themselves with Baator, and others have turned to the less sinister but plodding order of the celestial bureaucrats, alien machine intelligences (perhaps related to the ship spirits), or the coldly calculating bronze men of the Sunken Land along with their deity king Tatenen.

Over the over the years the close relationship between the1st class and outsiders has led to interbreeding, most often with the intent to increase the Passenger Classes' magical receptivity and power, and every member of the 1st Class has been marked by these alliances in some visible subtle way (see table below). The transformations have not advanced farther, only because the Passengers make a fetish of their humanity and infants the look too alien are either euthanized or given to their outsider kin to raise. It is fashionable to conceal ones outsider taint, and hence 1st class clothing tends to be concealing - tall hats to conceal potential horns are worn almost constantly despite the Apollyon's warm, humid environment. Perhaps because of thier taint Passengers hold fiercely onto human rituals and social norms. Life in Uptown can be a stultifying web of social obligations and proper behavior. Yet, it is well known that the 1st Class has adopted the vices of its otherworldly relatives as well as their powers and private lives (except for among the most orthodox machine entity tainted families) rarely mirror public propriety.

Playing a member of the Passenger Class:
Player Character Passengers are exiles, having lost some sort of social or economic conflict and suddenly deprived of their status and wealth. They have been cast into the lower decks to fail amusingly by their tormentors, and fail they will in the eyes of their former fellows, because no matter the power and wealth they accrue they have been reduced from 1st Class to Crew and can never regain their birthright. A typical exile from the Passenger class is almost as much at a loss as a character from another world, but possibly in a worse position. Exile comes suddenly, and few exiles manage to grab more than the valuables on their person before having their status and name stripped away by Stewards or the sadistic guards of a rival family. Struggle for survival on the lower decks is also an enormous change from life on the upper decks, even for exiles lucky enough to have some means. While the life of the 1st class has its difficulties, the constant struggle to contact the most powerful otherworldly entity, find the most alluring concubines and throw the must spectacular amusements (often these three things are related), does not include running from gangsters or wrestling with giant bilge rats for scraps.

A passenger exile is also alone, unless they can make their own place among the scavengers, while an exile may still have a few friends and family member on the upper decks who still speak to them, the vast majority of the humans aboard the Apollyon will despise the exile and take petty revenge on him for the slights and humiliations that the passenger class has visited upon them there whole lives. Only Flying Monkeys have a tendency to reach out to exiles, as every Flying Monkey has a genetic predisposition to seek approval and direction from sorcerers. Froglings largely ignore Uptown and Uptowners, with the curiosity and gregariousness that they often display towards the fisherfolk replaced with a certain smugness. Still, the isolation of the Passenger class in exile is largely of his making, as a lifetime of superior attitude and indoctrination have made most Passengers incapable of anything but rudeness towards non-passengers. Additionally, beyond limited magical and sometimes martial skills, Passengers generally lack abilities that are deemed useful in the Lower Decks. Most end up murdered, entangled in the criminal underworld or as trophy hangers on for powerful lower deck figures.

Game Play Notes
Passenger characters are mechanically Elves, being able to fight and cast spells. Saving throws and level advancement are as elves, as is spell casting and fighting ability. Passengers lack other elven immunities and abilities. When in doubt rules relating to elves will be used.

Skills :
Using the HMS Apollyon skill tables Passengers automatically receive (1) point in Hospesmancy from the Magic-User Skill list. Additionally they will have 1 Skill point of Martial Skills from the Fighter lists and 3 additional points that may be allocated to any Fighter or Magic-User skill, though no more than 2 points may be stacked.

Roll or pick at least one sign of taint: