The below character is the result.

Percian was sent into Rappan Athuk with a group of similar delvers heavy on fighters and clerics.  She survived and did some good - both taking risks faced with an interesting flame puzzle and acting true to her nature by sacrificing gnolls to Blibdoolpoolp 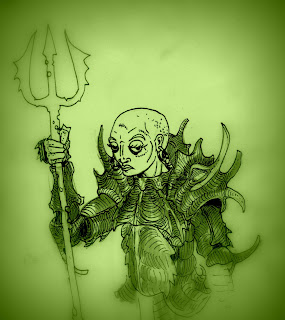 
Percian is appears as a female youth, she is in fact a lesser avatar (or proclaimed to be) of the cult of Blibdoolpoolp.  Indeed Percian has been touched by the sea: her lips are bluish and her flesh has the soft pallor of a drowning victim.  She is also unnaturally hairless and tiny scales on her hands indicate some not fully human blood.

Luckily for most people, the shrine where she was venerated by an order of unwholesome mutated and betentacled monks was burnt by crusaders.  Sadly, they were kind hearted crusaders and seeing what appeared to be a young girl, hesitated until Percian had armed herself.  The following slaughter was indescribable, but in the end one figure emerged from the crumbling shrine - that of a girl wearing bedraggled, salt-stained robes under an ornate suit of brown and white shell armor wielding a rusty trident, cleansed of blood by a constant drip of cold sea water.

Percian was kept form the more horrific aspects of sea goddess worship (such as the sacrifices by ritual drowning and shark tank), but is still a very strange girl having spent the last thirteen years (since her 3rd birthday) training with trident and plate armor and learning the chants of her sailor devouring deity.﻿  She has no useful skills beyond the ability to fight and no real goals other than veneration of the "sea mother" through doing so.  She's already shown a berserker like joy in battle and a dislike for monstrous humanoids.

So this is my first experience with the hugely successful Rappan Athuk and I can't say I was disappointed, I wasn't overly impressed, but it was fun and not remotely dreary or tiresome.  Of course I didn't get more than a quick impression so I may be completely wrong.

The Good:
1) Interesting Layouts.  The level we were on was some kind of circular passageway that had a strong gnoll presence.  with rooms off the corridor and a big trick/trap room limiting travel.  The upper level also seemed interesting (though it had already been explored) with multiple ways down to different levels.  Secret doors were used to a degree, but more interesting were some grates blocking the main passage that could be easily removed from one side and had to be smashed open from the other.  Treasure also felt like it was well paced, if not especially interesting.

2) Fun Puzzles.  The puzzles were a bit of the magical fait type, but they were interesting.  The centerpiece being a pit of magical flames with chains above it for swinging across safely and magical bridges activated by buttons.  A temple of gambling was also a fun interlude, though again the high magic setting isn't my favorite.  What the GM noted about these traps and tricks is that they have multiple solutions and ways to interact, which is good.  I absolutely agree.  There was also no gotcha element or hiding the ball, which is what makes traps fun as a opposed to a bore.  If you burn to death because you stand in the scorch marks in front of the lion statute with the tar dripping mouth, that's fun.  If you burn to death because you didn't see the inscription in room 38 five levels up and stepped on the green tile that's stupid (and seemingly lacking from Rappan Athuk).

3) Well Paced.  For a huge dungeon one worries that things will be slow with the traditional 40% - 60% empty rooms, it seemed like there were very few empty rooms in Rappan Athuk with puzzles, strange objects and monsters being pretty common. Even the 'empty rooms' contained some dressing, princpally Orcus worshipper statutes (which made a decent set up for a trapped statute later).

The Not so Good:
1) Mundane Monsters.  It was a combat heavy session, and while the mosnters were appropriate: (Wandering) big pack of giant ants, gnolls, zombies and ogres (Encounters) magical stone bat, shriekers, gnolls and hyenas, they were almost all standard monster manual creeps, and didn't really have much in the way of interesting attacks or powers.   Additionally there didn't seem to be much in the way of factions below or a real sense of why certain monsters were in certain places.  I understand its a big dungeon and there are unique things in many of the other locations, but there could have been more.

2) Funhouse Feel.  The dungeon didn't feel especially cohesive.  The monster placement didn't seem to be related to much and it would be hard to say what the dungeon was except a dungeon.   This may be because we moved quickly and didn't really try to understand the place very much, but I find megadungeons work well if there's a clear break up of areas and monster factions that add a level of living interaction to the place.  As mentioned above the traps and tricks relied on magic (though I understand this is not the case on the level above), and while fun weren't especially unique as magical traps/tricks go.  I like something that makes a little more sense with the internal logic of the dungeon.  Again maybe the session wasn't long enough to suss out the details, and Rappan Athuk is certainly a fun dungeon to play in.
Posted by Gus L at 6:00 PM