Pahvelorn, the Pits of waste and despair...

The session before last (A lovely romp through hill, dale, and cliffhanging barrow) another PC was lost. Ogam the reluctant magic-user plummeted to his death trying to leap over the corner of a spiked pit.  Ogam is the 3rd of a line of magic users replaced by their hench-people to meet his fate within the maze of Phavelorn.  Margo died to the fists of a disgruntled skeleton in the Necromancer's villa.  His henchman Higgans (a man of a truly evil aspect, but solidly competent) died from a swarm of skeletal rats in the the Cursed Shrine outside the pit, and now Ogam, who was originally hired to carry a lantern and was just coming into his own as a caster, plummeted to his death fleeing giant ceramic ant automatons in the forgotten crypt of an imprisoned sorcerer.

Ogam was replaced by the most dubious mage yet, a twelve year old sorceress who was "rescued" from an evil and insane wizard who's main hobby was transforming men into shaggy beast monsters. Eraria is a former street urchin, with some magical facility who quickly and without hesitation switched sides when her master was killed.   It is not in doubt that she is a black-hearted occultist, but she knows a good amount of magic and currently has the libraries of the four other dead wizards that have been part of the party as well as a wealth of scrolls and codex's recovered from the ruins.

Eraria is perhaps judged too harshly above, as it's not as if she's ever had a chance to be good, or seen anything positive come out of it.  One can only hope that the exposure to the party will change her for the better.  Even the rat worshiping mercenary attitude of Beni Profane would be an improvement on the insane demon pacting philosophies of Louvritar the Bleak Eyed, Eraria's former master.  Such change seems unlikely though, as Eraria is perhaps the most intelligent of the party and seems set in her ways already, having taken on an orphan named Genk as an apprentice to lead down the path of dark sorcery.

Another recent addition to the Phavelorn party is "Donkeyteeth" an orphan recruited by Beni to act as his "apprentice" in the honorable trade of rat catching, the dubious trade of tomb vandalism and the unwholesome trade of putting poison arrows through the eyes of anything questionable, human, beast or entity. 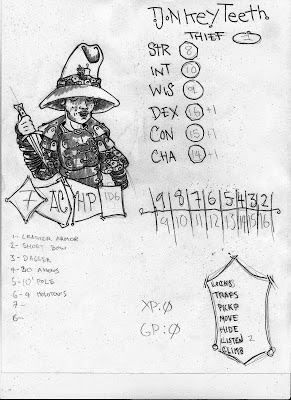 Beni has dressed the slight boy in a manner similar to himself and has been seen teaching the lad (who's real name is undoubtedly something other than 'Teff') the basics of leaping from the shadows to plunge a dagger in a mans neck, peppering things with arrows, climbing onto the roofs of houses and other necessities of the rodent extermination trade.

Donkeyteeth is a quick study and when faced with a charging pack of beastial skeletons the lad managed to empty his enter quiver in seconds destroying one of the abominations, chipping five more and unfortunately breaking his bow in his enthusiasm.  Still it's not the skullduggery of his new life that has Donkeyteeth most excited, or the new clothes, strong drink and jewel encrusted daggers pulled from moldy tombs - it's the religion.  Donkeyteeth seems to be singularly attracted to Beni's vague and rambling discussions of his half serious devotion to the ancient Rat Spirit "The Mother of Thousands".  Those knowledgeable about "Her Fecundity" don't find this strange.  Priests and priestesses of the Rat Goddess are a strange and diverse lot, almost universally chosen from the lower orders of urban society, and from the most desperate of those orders.  Urchins, beggars, widows, washerwomen, low class criminals, the crippled, the dissolute and the insane are the typical vessels of the Mother.

It's Notable that Donkeyteeth has better stats than his master.
Posted by Gus L at 10:20 AM