Yes this is a best of post, but hold on a moment before you sigh and wander - it's a best of post of things that I've experienced playing games in the past year.  I think there's tricks, traps and monster ideas in here worthy of stealing or adapting to almost any setting. 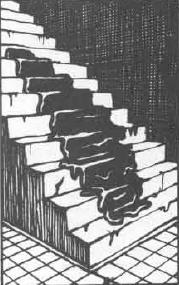 1) Pahvelorn - Grey Ooze Trap
Recently in Brendan of Untimately ran a session of his mega-dungeon "The Pits of Pahvelorn" that included an ingenious trap/trick/obstacle.  Now Pahvelorn is a great campaign, I play it almost every week on G+ (with the same several players) and it's inspired a good deal of loyalty in the whole crew.  It's good because Brendan is a good GM and designer, making a challenging, varied and interesting world where focusing on exploration always interesting.  His in play decisions and house rules stretch the Little Brown Book ruleset in ways that make is surprisingly playable and fresh.

In the single most tense session we've played (though some other moments come close) the party found their way into a barrow blocked by a shallow (8 inches) pool whose bottom was coated with metal eating, flesh dissolving gray ooze. I assume this is the standard gray ooze of D&D legend.  While testing the pool with rats revealed the ooze's presence and dangerous nature, the water prevented a good firebombing, which is every low level party's first solution.

Because Pahvelorn's XP calculation is based solely on treasure gathered, and the ooze had none visible, there was no reason to fight the thing and every reason to bypass it.  Trying to figure a solution took half and hour until the party thief was convinced to stilt walked across the room on ten foot pole stubs with some rope and spikes.  This itself was tense with several near slips into the ooze churned pool.

A precarious bridge was laid between the entrance tunnel and the tunnel on the far end of the room by spiking two ropes across the pool. The bridge held for everyone except a beloved henchman who splashed in and fled the barrow in panic.  The ooze didn't even get him, it just ate his armor as he shed it frantically.  Something did get Levis though when he dashed outside into the underground crystal forest where the party found his mauled body later.

Now this trap/encounter is classic, heck there's a cave pool of gray ooze in Keep on the Borderlands, but the way it was run, and the party's solutions for the trap made for a great session.  What's key was that rather than just hand wave the success of the reasonable plan Brendan kept the tension high with (apparently fairly low) chances of failure.  Even the henchman falling in was a cascade of random chances, but the sense of tension as Levis the antler headed fighter thrashed in the shallow water shedding his armor, with the players shouting about what to do, firing ineffectual crossbow bolts and discharging weak wand blasts at the ooze was great, memorable and exciting.

2) Wampus County - Spider Piano
Hard to pick a specific Wampus moment that really encapsulates the whimsy and atmosphere of the setting - the trip into the sugar fairy's dungeons transformed into mice was a second choice, as was a blanket lauding of Erik's NPCs who are bizarre, memorable and almost perfect for the setting.

One moment stood out however, because it was very atmospheric and properly strange.  Invading a cave of bandits in an effort to establish themselves as the "law" in frontier town of Thistlemarch, the party of 3rd and 4th level PCs was having a fine time, easily dispatching, subduing and tormenting bandits.

Upon finding the cave of the bandit leader the party should have been clued in something was wrong as the place was devoid of furnishings beyond a piano.  At the piano sat the presumptive bandit leader, who the party knew to be a wizard, playing calmly.  Deciding to end any wizardly threat before he could cast, Cobweb the party assassin moved with lithe stealth behind the piano player and drove a saber into his back with a natural twenty.  This did something on the order of 1D8X4X2 points of damage - I think it was 48 ultimately, but the player kept on playing, and Cobweb looked up to see transparent threads leading into the darkness above from the piano player's body.

Yes, the bandit leader was a spell casting spider, hiding in the darkness at the top of the cave.  The resulting battle involved spells, bullets and arrows fired into an impenetrable magical darkness.  The party also tried burning the piano for light and and general mayhem ensued as filaments of webbing trapped charging party members.  Luckily one of the party wizards managed to get the spider sorcerer with a part of a web spell and the villainous arachnid (with a dastard's curled mustache) was brought to justice (later to escape with the help of his snakeman lawyer).

What made this encounter great was the simplicity and whimsical macabre nature of the trick.  The party has a tendency to annihilate monsters with initial backstabs/lance charges and flurries of incapacitating spells (When your 4th level wizard has only Web, Mirror Image and Emasculating Evocation as 2nd level spells you cast web a lot) and Erik managed an elegant solution to this tendency towards first round overkill.  There wasn't any need to give the villain special powers or extra HP, just make him clever and set some clues that led the PC's to a different assumption.

In my own HMS Apollyon megadungeon I am proud of my unique monsters, I have yet to use any non-unique or previously published creature and think this makes the players pause before charging into battle.

My favorite effect of using new monsters is when players react to them in interesting ways - following the mimicry of crayfish headed hounds into simple traps or negotiating and ultimately rescuing a tribe of mutagen bomb tossing leechmen.  One of the better moments was when, while investigating a long sealed and abandoned police substation, the party came across a room of skeletal remains.  Around the bodies of thirty or so refugees, dead forty years from the shock wave of a massive explosion, a phantasm of necromantic power had grown up.  The party investigated the room, taking a few moments to figure out that the piles of rags filing the it were skeletal remains and then becoming extremely cautious when transparent figures began to mist at the edges of their vision.

The party could not of course have calmed the angry spirits who beseeched them for help and information, but they tried, and when a cleric attempted to turn one of the phantasms and a hydra like mass of necromantic mist formed with twelve snapping skulls floating at the end of long snake like necks/limbs all fourteen party members and henchmen ran.

They could have taken the thing, I'm sure of it, the twelve headed phantasm went down fairly easy a few sessions later, but the combined weight of the unknown nature of the creature, it's apparent numbers/size and a general fear of incorporeal (well not actually the case here) caused them to run.  No one was hurt, but I feel like this was one of the best moments of GMing, where descriptive power and the imagination that went into creating a new monster causes the players to react in an unexpected way.  That the twelve headed phantom was a shibboleth for the next few sessions made this even better, and when the PC's finally did it in, I think it felt like a huge accomplishment.

Why does this memory stand out? Because it felt raw and unexpected.  So many of the things that occur in a game of D&D are old news, and lack the mystery or excitement of being new and strange.  New strange monsters can do this and I enjoy using them because they create atmosphere in a way that a wight or a pack of goblins doesn't.

4)SWN - Use of the Red Demon and Play Reports
Apis Furioso over at Pilgrims Guide to the Zeitgeist used my Red Demon mini-module to run a game of his gonzo Stars Without Numbers Space Pulp/ASE crossover.  It makes me immensely happy that he did this, and more so that he posted some play reports.  I like seeing how other people interact with the stuff I think up.

Now I should also say I've played in couple of games of SWN that Apis has run on G+ and they were good.  His own locale, a long abandoned space station located above the world of ASE and possessing an insane AI/Orbital God, A cryogenics bank of henchmen, haunted luggage and dangerous public art, is pretty interesting and fits well with the wacky serious/deadly world of ASE.

What was interesting about reading Apis's play-through of the Red Demon were the ways his players overcame the location's dangers.  They were smart enough to avoid the traps or had some technology that allowed them to overcome them without harm, but they fought the monster I expected them to fight using the trick I had built into it's description.  This was immensely gratifying, but more interesting was the way the testing party handled the most dangerous monster in the location, by poisoning it with elements from one of the traps.  A perfectly excellent old school solution to a giant poisonous amphibian.  Of course now there's an undead, mummy rot infected, radioactive giant amphibian monster roaming the wastes of Apis' ASE world which also cheers me to no end.

I guess this all makes me proud that I managed to design a ten room adventure with several different ways of solving it and a non-linear map. I am more filled with pride because some folks I don't know played it and had a fun challenge.

Joe the Lawyer runs a hexcrawl occasionally that he calls "Blood Island".  It's officially a higher level (5-10) viking themed world without too much dungeon and focused on random hexes of danger.

I've played Blood Island only once with my (now 5th level) flying monkey Bobo Sa'Daan.  What made Blood Island interesting was that Joe had sketched out his hexes, not in a gazetteer format, but as a set of random encounters.  Mechanically this means that he was filling in the map with pregenerated encounters as he went along.  I think this might make hex crawls fun for a GM, while keeping them from being completely random procedural bore fests ("Ummm, yeah so you come over the rise and there's [rolling noises] a pack of [rolling noises] 28 gnolls").

What I enjoyed about Blood Island was that it had cohesion greater than I expected for a random hexcrawl, and the encounters themselves (man eating tree, hiding from cawing blood demons, a strange statute, a swampy pit and evidence of a massacre conducted by vegetable pigmies) were more interesting and connected than the one line descriptions most hex crawls generate.  Another element of cohesion was that the party was theoretically searching for a lost expedition, and along our path we were forced to interact with hazards in order to find evidence of their fate.

This is an example of how a novel means of preparation and design can make something fun, and how important some kind of cohesion adventure thread/mission is to even wilderness adventures.

Wampus County - Trip to Carcosa/Deck of Many Things Hijinx
ASE Home Game - Battle at the Moribund Pleasure Dome
Pahvelorn - Discovery of the Ratling Race due to bad carousing roll
HMS Apollyon - Verticality as a major theme of adventure with assorted pockets of mini-adventure in the Fetid Pit
ASE G+ Game - The Mute Tower, in my opinion the most organic and interesting little dungeon I've designed.
Posted by Gus L at 12:51 PM