Dragons are pretty iconic to table top roll playing games – what with the whole “Dungeons &” thing.  They’re also a key element to most of the myths that created the basis for tabletop fantasy games.  It seems a shame not to include the creatures in a game settling, out of nostalgia if nothing else, but they are also such artifacts of high-fantasy that it’s hard to place them in another variety of setting.  I personally often play or run science fantasy settings, and while I think it’s possible to include a dragon in some place like The Land of 1,000 Towers, or the HMS APOLLYON, I think it's hard to do well.  My solution is a slight adjustment to what dragons are - not a race of ancient lizard creatures, but the embodiment of apocalyptic tragedy.  Below are the basic chromatic dragons reskinned as nightmare beasts generated by the psychic reverberations of thousands of dying souls during the ancient cataclysmic fall.  The type of tragedy that created the dragon would determine its color, powers and appearance rather than the nature of the environment it lives in. 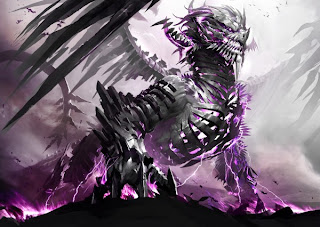 I envision these monstrous beasts each inhabiting a “devastation” or "desolation" around the location of the tragedy that created them eons before.  The only thing living in these devastations would be the dragon itself and its numerous, smaller, offspring.  I can’t conceive of the actual dragon as an easily killed 8-12 HD creature, but suspect that it’s offspring would vary in size with statistics similar to a normal D&D style dragon, while the actual overlord of the devastation would be something huge and almost godlike in power. 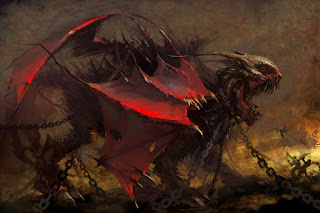 Irradiated Dragon (White) – The quickest of the cataclysms that befell the old civilizations was the discharge of great weapons that destroyed both target and wielder in a mutual destruction of searing light.  Millions died to these weapons of pure energy, cities were reduced to sand and the earth reduced to glass.  Haunting these glassy sheets, now cracked and scoured by poisoned winds are horrors of pure ravening energy.  The Irradiated dragon, as a creature of almost pure spirit appears much like the legendary beast - reptilian in form, winged and terrible.

Irradiated Dragons' desolations are always the blast areas of ancient atomic weapons, with the dragon always lairing in the blast crater itself while it's offspring are pushed outward from the center depending on size and ferocity.  The most aggressive and bestial of dragons, Irradiated Dragons rarely speak before attacking and rarely attack with strategy or complex efforts at self preservation; instead Irradiated Dragons depend on their terrible breath weapon to annihilate any trespassers into their domains.  The breath of the Irradiated Dragon is a form of the energy that created them, a cone of searing light that reduces those it touches into ash shadows on nearby walls or floors.  Even those who manage to avoid this are blast are exposed to the invisible poisons of the ancient weapons, and will suffer from a terrible wasting disease if not cured, wither by magic or esoteric means.

Pestilent Dragon (Black) - Dragons of death and disease, Pestilent Dragons appear most often as undead or diseased themselves.  Visible bones, ragged poxed flesh and a shambling gait conceal the true danger of these monsters.  Unlike most other dragons, Pestilent Dragons allow other forms of life within their demesne, specifically, they are served by great masses of the diseased and undead victims of their taint in addition to their broods.

The lair of a Pestilent Dragon can be any ancient ruin, though they seem to prefer areas that fell later in the collapse, such as ancient refugee centers and hospitals, and where huge numbers of those fleeing cataclysm died of disease or other after effects.  The devastation of a Pestilent Dragon is likewise diseased, with the stench of decay hanging in the air.

Pestilent Dragons are implacable by nature, methodical and slow, using their countless minions to wear down their enemies, only slinking in themselves if necessary.  Like Verdiginous Dragons, they prefer inactivity to the fury of Irradiated or Sanguinary Dragons and are content to lurk deep their lairs, surrounded by rot while their disease spreads above.  This lassitude does not mean that Pestilential Dragons are any less deadly than other draconic entities, only that they often wait for enemies to come to them before dousing them with a breath of putrid and poisonous slime.  The breath of a Pestilent Dragon is burning, diseased pus that they spit out in a linear gout.  Any struck by this slime must Save vs. Poison (at - the HD of the dragon) or collapse dying to the ground.  Even those not directly struck by the Pestilent Dragon's attack will often be incapacitated by the terrible stench that accompanies the dragon's discharge.

Verdiginous Dragon (Green) – The winding down of the machines as society collapsed after the cataclysms created collective despair and desperation.  The Verdiginous Dragon is the spirit of the untold deaths caused by the breakdown of technological society.  They are not only the embodiment of starvation and want, but also of the frustration and sadness at the contraction of the world and the panicked struggle to keep machines and technology running long past its functional life.  Verdiginous dragons do not appear to be living at all, but rather to be sculpted from broken and patched machinery, with jagged spines of rust, tangled together with corroded wires and moving on gap toothed gears.  Often thin and spider-like, Vertiginous Dragons frequently have more than four limbs, and creep stealthily about the ruins they commonly lair in.  Excellent magicians and reasonably intelligent, Verdiginous Dragons, more than any of their kin are capable of reasoned discourse.  Yet they are beasts of immense, unnatural sadness and overwhelming hunger.  Greed for the necessities of survival (useless to the dragon) drive a Verdiginous Dragon, and no amount of stockpiled food, wealth or technology can satisfy them.

The lair of a Verdiginous Dragon will always be some place of ancient industry or technological triumph.  The dragon does nothing to repair or keep up these sites as they are slowly subsumed by nature, but is immensely protective of its domain, afraid that strangers will remove items of value from the ruins. When striking Vertiginous Dragons breath a toxic gas cloud, that has the additional effect of rapidly corroding metal and leather equipment and aging those who fail to save against the gas' psychic effects.

Phantasmagoric Dragon (Blue) – Collective delusion, misplaced belief, and hopelessness undoubtedly killed as many survivors of the fall as plague, starvation, and war, and the draconic spirit formed by these deaths is the Phantasmagoric Dragon.  Sometimes corporeal, sometimes ghostly, these creatures are mercurial, highly intelligent and completely unpredictable.  They don’t have needs and desires so much as whims and intricate delusions that form a separate logic beyond reality’s.  It is hard to describe a phantasmagoric dragon as the creatures can change suddenly and on a wild whim of their fragmented minds, but most often a Phantasmagoric Dragon takes the form of a great ghostly wyrm, swimming through the air.   Phantasmagoric Dragons are accomplished magic users, as sorcery is itself a form of unreason and specialized delusion.

The lands around a Phantasmagoric Dragon's lair will have themselves grown terrible and strange, though not lifeless.  A jungle of indescribable plants and twisted animals fill the devestation of the Phantasmagoric Dragon, each a figment of the dragon's dreaming mind. Phantasmagoric Dragons are the only dragon that does not seek out the ruins of the civilization, and instead lair in natural caves or deep thickets, often of incredible beauty.

The breath weapon of a Phantasmagoric Dragon is a beam of pure psychic energy, that not only melts flesh and bone, but also blasts the soul out of its targets, turning those it kills into fragmented vengeful ghosts.

Sanguinary Dragon (Red) – Forged from the death and madness of endless war and the spirits of the countless dead of the conflicts before and after the fall, Sanguinary Dragons do not so much resemble giant lizards, as titanic beasts, like a winged bull accreted from the destroyed and cast off weapons of the final war.  The Sanguinary Dragon is the spirit of war without meaning, honor or purpose, and while they are often willing to parley, they have no goal except to maximize the carnage, destruction and loss of life that gives them power.  Huge, armored and moving with the scream of rusted metal grinding against itself, these fierce beasts have no face, eyes or mouth, only a battery of ancient weapons in the place of a head.  They do not breath a cloud or cone of strange power, but fire this battery, and those that stand before them are torn apart by a hail of shells, maser beams, rockets and bullets.  The cacophony that accompanies this deluge will deafen and disorient all nearby and those who manage to avoid the attack can only do so by taking cover or throwing themselves to the earth.

The desolation formed by Sanguinary Dragons is often a shell pocked landscape of destroyed weapons technology and burnt forests where the most fierce battles raged in ages past.  The Sanguinary Dragon works to preserve the destroyed and mutilated aspect of the landscape, regularly flying forth from its lair to bombard tracts of land and destroy any life it finds (including its own offspring). The dragon’s lair itself will either be an ancient defensive complex of bunkers/shelters or in the shattered depths of the largest ruined war machine available.  Battleships and other seagoing dreadnoughts are favored lairs of Sanguinary Dragons, as are crashed military space vessels.

Sanguinary Dragons are not hyper intelligent or scheming like Phantasmagoric or Verdiginous Dragons, but given that the spirits that created them were largely those of soldiers, they have a great tactical knowledge and relish ambushes, feigned retreats, and choosing the correct ground for battle.   Sanguinary Dragons will often know magic or possess magic like abilities, but the spells in their repertoire will be limited to the most destructive and combat oriented magics.

Indomitable Dragon (Gold) – The antithesis of all other dragons, these creatures are believed a mere rumor, as they are not created not by negative psychic voids of terror and death, but by the triumph of the human spirit and great wells of hope.  If they are real they do not produce a devastation like the other draconic entities, and instead a believed to travel amongst the emergent cities of humanity, concealed in human guise.
Posted by Gus L at 9:59 AM