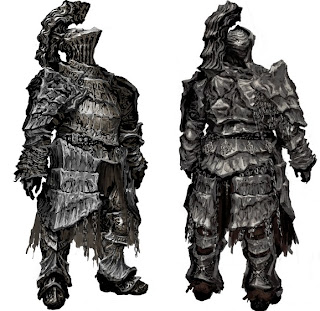 In a recent game aboard the Apollyon, a party of adventurers managed to trade some scavenged items of considerable value for various magical boons from both the Marines and Malchris the Bug Eyed Devil Baron.  Below is the list they may choose from.
FROM THE MARINE’S STORES OF FORBIDDEN MAGIC AND ANCIENT ARMORS

1. Force Buckler – a white ceramic buckler with a glowing teal boss at the center. It’s incredibly durable, but the small size prevents it from being any more effective than a regular shield. The buckler's advantage rests in the magi-tech force generator under the boss. With a charge that once per day can either cast the equivalent of the spell “Shield” for the spell’s full duration (5 rounds), or “Fire Shield – Cold version” for one round, or “Protection from Normal Missiles” for one round.

2. Giant Rusted Skull – The remnants of a large Iron Elemental (at Quartle’s request). It’s a striking piece as décor, massive and vaguely like an elephant’s skull. It is warm to the touch, and sometimes glows momentarily as if red hot. If fed to a Water or Air Elemental it will allow the creature to grow in power up to the level of the Elementalist controlling the elemental or a maximum of 8 (the quiescent Elemental’s original HD). A Water elemental devouring the earth elemental essence will become more solid (ooze, weed or ice) while an air elemental will become more present (lightning, snow or dust).

3. Submachine gun – A nice, well maintained submachine gun. Not magical but a fairly advanced gun, with sleek lines, enameled white. It  looks like a “Jatimatic” (look it up). Its shells do 1D6 point of damage and it has an effective range of 300’ (-1 Hit after 100’). It can fire 2 aimed shots per round, or bursts of up to 20. It comes with four 20 round box magazines. It’s also supposedly waterproof.(Note: All gun statistics are for the HMS Apollyon - otherwise it's just a reskinned crossbow with +1 hit when firing bursts)

4. Finger of a battle-saint in a glass reliquary - It will glow blue when there are undead within 1,000 feet.

5. Veil of the Umber Brides - A muted brown mourning veil that obscures the face and smell faintly of incense and dried blood. It allows the wearer to alter their appearance as a “Change Self” spell once per day and if a fervent prayer for concealment is made will make the user invisible for 1D10 Turns, though afterwards it loses its power.

6. Door Breaching Patches - Four 2”x 4” pads, indescribably ancient,  in a brittle plastic case. When applied to anything and trigger (a red circle in the pad's center), the chemicals and magic within each pad will burn through an area of metal, stone or wood up to a foot thick the same size as the pad. The process takes three rounds, and pictorial instructions on the packaging suggest the devices are to be used to destroy locks.

7. Suture-Peed - A long biomechanical insect in a glass jar. If opened and poured onto a wound it will convulse shut suturing the edges while injecting powerful stimulants, antibiotics and pain killers into the patient. Cures 3-18 HP of damage.

8. Soul in a tube - The soul of an ancient marine named Squad Leader Jaxsi trapped in a plastic tube by strange magic. Jaxsi knows a lot of things about the ship but is petulant and depressed. If asked he’ll give some advice or directions once per session (or week). Basically a commune spell, but he can identify ancient and much eldritch technology. Jaxsi can also read ancient magical writings/inscriptions and speaks fishman.

Calming Vapor – Level 2 – Range: 20’ x 20’ cloud Duration: 3 Rounds + 1/Level of caster Save: No
Produces a white fog that smells of fresh rain from the caster and causes the effects of mind altering spells (confusion, sleep, etc) to be instantly removed from any who breath the vapors.

Crystal Blight – Level 3 – Range: Touch Duration: Permanent Save: Spells
After casting the next creature or other living thing the caster touches with a piece of magically infused quartz crystal (Gem 10 – 100 GP, consumed in casting) will be infected with a disease that turns them into a crystal entity over the course of several weeks. This transformation is lethal and irreversible without casting of Dispel Magic and Remove Curse spells on the victim before 1 week has passed. The spell takes 1 week per HD of the creature to completely transform them into a barely identifiable crystal blob, and is very painful. It can be used to make rather attractive crystal sculptures when used on large plants.

10. Title to a small house in Fisher’s Quarter - The title to fee simple in a small, two bedroom flat in the Fisher’s Quarter. It was left to the Marines by a benefactor.

FROM THE DEVIL’S TREASURE TROVE

1. Gargantuan Bronze Armor – Crude Armor of monumental and rude make. Barbarous in design and obviously diabolic in manufacture. Malchris chuckles and says ‘Oh that Huil Chalixi and his moronic patron Geyron would gnash their teeth if they knew I was handing this trophy to a mortal’. The suit weighs at least 1,500lbs and is made of thick, overlapping sheets of barely worked metal, pocked with impurities. Still, three inches of poor bronze provides a great deal of protection (AC of 1). Rather than enchant the armor’s strength, it’s maker has covered it with diabolical glyphs (green and still wet looking) that reduce its weight to that of a suit of light chain mail.

2. Mask of Terror - The vaguely alive face of some kind of scaled devil nailed to a wooden mask. When worn it allows the caster to project fear into any intelligent creature under 3HD up to 40' away, if such a creature can feel fear. Targets must save vs. Paralysis or flee. The Mask can howl, and does so both when causing fear and if perplexed.

3. Devil’s Dice – a yellowed six sided die that may be rolled and the number added or subtracted to any roll made by the PC. After use the die bursts into flame and is gone.

4. Bottle of Devil’s Rum – Contains 5 large gulps of frightful liquor. Drinking it makes a devil mean, and does worse to a human. As the black haze of drunken rage descends the drinker goes into a furious frenzy gaining an additional attack per round and a +3 to damage for melee attacks. Every round after the first the imbiber must save vs. Spells with a cumulative -1 penalty, or pass out into a stupor of mumbling rage. After an additional D4 turns the drinker will recover with a splitting headache and stomach pains. Passenger Class characters gain a +2 to their saves due to their diabolical heritage.

5. Black Spot – A polished ebony token. If a name is inscribed on it and the token is presented to that person, or left where they may find it, they must make an immediate save vs. Death or die.Works on sentients up to 12 HD - the name must be the creature's true name.

6. Arguments of the Undermind and Refutations of Goodness – A handsome book, bound in slick black leather. It contains the teachings and philosophies of Asmodeus. Reading the text will grant a +1 to Wisdom, but requires a save vs. spells. If the save is failed the reader also suffers a permanent -1 to any saves against mind control or charm cast by a devil or other lawful evil creature.

7. Psychic Parasite – A symbiotic creature of the deep hells, this ethereal jellyfish attaches itself to its patron’s psyche and lives vicariously through her experiences. It grants a +1 Constitution (up to 18) as it feeds primarily on pain.

8. Biting Hatchet – A throwing hatchet carved of bone. It is alive, and if thrown it will bite and burrow into a target of less than 6HD killing them. It is destroyed after it devours one target.

9. Ring of Scorn – A band of oily reddish stone that fills the wearer with disdain for weakness and contempt for failure. Besides causing potential personality disorders, the ring makes its wearer immune to Hold Person and similar effects.

10. Bandage of Unlife – if wrapped around the wounds of a recently dead person, this bandage will return them to life, or something similar. The revived individual will appear as a walking corpse and suffer the permanent loss of 1/3 of their HP, but will be functionally alive and unchanged. The now undead individual may be turned, and no longer needs to eat, drink or breath but must be careful about insects and mold. The bandage may never be removed or reused.
Posted by Gus L at 11:19 PM