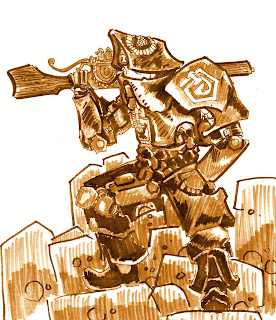 Normal "Body" Armor comes in three basic varieties: Light, Medium and Heavy.  Armor is determined by variety and maximum AC, rather than material.  Frogling beaded cord armor is just as good as ringmail (Light AC 7) and Steward Segmentata is as effective as a merrow-crafted coat of teeth. (Heavy AC 4).  While Armor has a listed AC, this is the best AC that the armor will provide for a trained user. All classes except magic users receive some armor training as part of their basic package of skills, and selecting certain proficiencies can both provide training previously untrained types of armor and expertise in the use of armor that grants additional bonuses.

Better AC (to 0) can be provided by powered armor, or boiler mail, which also grants (often considerable) damage reduction.

Training is part of the initial class skills, and may only rarely (War Mages, Duelists & Crusaders) be acquired later through skill selection, while expertise is always determined by skills and grants improvements in armor use over the proper use training provides.

Expertise in a type of armor provides increased bonuses to it's use, and comes from the class proficiencies of: Light Armor (Specialist,Fighter), War Mage (MU), Medium Armor (Cleric, Fighter), Duelist (Specialist), Heavy Armor (Fighter, Cleric), Crusader (Cleric)
For Example: Heavy Armor, with a level obtained each at 1st, 4th, 7th and 10th after selecting the proficiency is as follows:

Level 1 - Efficient Use - Penalties for the use of heavy armor are eliminated (Initiative Penalties, Movement Penalties, and Dex Penalty) - player may still not engage in stealthy movement or swim effectively.
Level 2 - Endurance - long use of heavy armor grants additional resilience and endurance in the form of +1 HP per HD. Additional skill with armor also grants a 1 point bonus to AC (to maximum of 2) while wearing heavy armor.
Level 3 - Overpowering Force - Use of the hard edges and increased weight of the armor give PC +1 to damage in  melee while wearing heavy armor.
Level 4 - Juggernaut - The heavy armor wearer's faith in his protection allows him to ignore most mind effecting spells while in battle and he gains an additional save vs.sleep, charm, hold and similar spells while in combat. All saving throws receive an additional +1 bonus if made while in heavy armor.


Largely outside the system of body armor, steam armor (or boiler mail) is a armored suit with internal power, the pinnacle of technological and sorcerous advancement aboard the Appollyon.  Boiler mail requires special skill to use, and the skill level provides a bonus to boiler-mail "stability".  Powered Armor is finicky and temperamental even during normal use, but when exposed to the rigors of combat it becomes downright unreliable, depending on pilot skill and frequent repair to work well.  Additionally it is not like regular armor and provides the following penalties when used without exceptional piloting skill.  Piloting can eliminate penalties marked with an "*", including the chance of catastrophic failures.

Basic Boiler Mail Penalties: No dexterity bonus to armor class, Boiler Mail wearer acts last in each round of combat*

Stability: Basic Stability is intrinsic to each suit of armor and determines how much damage it can take before needing repair or readjustment. Stability is improved by pilot skill, and reduced by malfunctions and combat. Each time a piece of Boiler mail is stuck in combat and damage actually occurs to the pilot (is not cancelled by the armor's damage absorption) the armor subtracts '1' from stability value.  Each time the pilot rolls a natural '1' on any roll related to a physical task the armor has malfunctioned and the pilot rolls 1D6 and adds the current stability rating, using the table below for results. A duplicate result means that the next lowest result should be used.

Repair and Recovering Stability.  A trained pilot or mechanic may return armor that is not catastrophically damaged to operational condition at a rate of 1 point of stability per turn of repair and refueling. This cannot be done effectively in combat. A maximum of field repair of stability equal to 1D8 plus the level of the pilot or mechanic's Piloting or Tinkering skill, plus any bonuses, may be made this way.  Prolonged repairs in a machine shop will repair a suit back to full stability between sessions.
Posted by Gus L at 11:00 AM