The Fortress of the War Dead, quickly erected from beams and slabs of broken deck plates is fallen, smoke and the stench of burning undead corpses now fills the buried vault wafting through the Rust Gates and putting the downtrodden there off their pitiful dinners of fungus loaf and kelp noodles. To the fanatical zealots operating out of the Rust Gate's shrine to the Ship Spirits, this is the scent of hard won victory, and the wake for the martyrs from the recent battle  looks like it will last a week, providing free food and drink to any who will light a candle in the martyrs names.

Yet few recognize that he victory is not Brazen Gear and the Sect's alone.  The hard work of throwing open the main gate and breaking up the dead's blocking forces was done by mercenaries including members of the rival Leviathan Cult, and Church of Lyriss.  Brazen Gear is a man of his word however and these hired killers will each receive one of the following items (of their choice) from the Sect's store of Holy artifacts listed below: 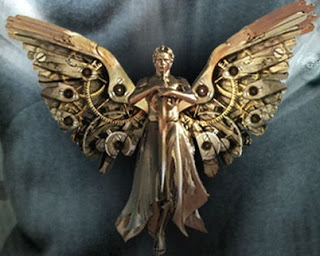 1. Scrolls of Power - These are a pair of loosely rolled thin scrolls.  Each contains, hidden amongst the tangles of something that may be the blueprint of an ingenious hatch locking mechanism are the arcane formula for the preparation and binding of mechanical replacement limbs and organs. This spell is a 7th level Cleric spell or 9th level Magic User Spell.

The second scroll, also resembling a blueprint, possibly for some type of enormous pumping facility, contains a spell that will reveal the true structure and nature of the hull (or similar mechanical environment) within the caster's sight. It is a 5th level Clerical Spell or a 7th Level magic User Spell.

Clockwork Regeneration: When a Regenerate spell is cast, body members (fingers, toes, hands, feet, arms, legs, tails, or even the heads of multi-headed creatures), bones, or organs (including both eyes) can be replaced by specially crafted mechanical version. The process of regeneration requires but 1 round, but the preparation of the clockwork substitute takes from one to three weeks and requires a skilled tinker or artificer to make.  The production of a mechanical part will use 1D6 x 1,000Gp in materials.  Replaced organs or limbs will function identically to normal organs or limbs, but appear obviously mechanical.

Forthright Voices of Small Things: When the caster employs this spell, all things within the area of the sight appear as they actually are. Secret doors become plain and crawlspaces, access tunnels and ducts become obvious. The exact location of displaced things is also intuitively known. Invisible things (including creatures) and those which are astral or ethereal become quite visible. Illusions and apparitions are seen through. Polymorphed, changed, or magicked things are apparent. Even the aura projected by creatures becomes visible, so that the caster is able to know whether they are good or evil or between and to know their loyalties to the factions of  the hull.  False writings (those including lies, or dangerous runes for example) will also reveal themselves

2. Auto Cannon - A large crank operated, water oil jacket oiled repeating cannon.  This weapon is beautifully crafted and cared for made of polished brass and blackened waterproof enchanted steel.  It can be carried with difficulty by two strong humans, but cannot be fired without a mount.  It is meant to be used as a handheld weapon by a boiler mail suit with a strength of 19 or greater or on a light gun carriage.

The weapon may fire once per round and has a reload-able hopper on the side that contains a chain of up to 25, 37mm shells (each shell must be custom made and costs 25GP).  It may be fired  once per round as an aimed shot doing 2D12* points of damage, or cranked at full speed as an area effect weapon, using five shells per round and effecting a 10' x 10' area.  Any target in the open must Save vs. Wands or take 1D6* points of damage up to 4D6* for each point by which they failed their save.Targets in cover save vs. wands to avoid damage and take 1D6* on a failed save.

The shells are explosive and silver jacketed shells are not strong enough for safe use, though a solid silver slug (costing 250 GP) may be purchased but will only do 3D6* points of damage to a single target.

The shells are bulky and each set of 25 is considered an encumbering item.  Reloading is simple but requires either 2 rounds of effort by a crew of two to reload as a carriage mounted weapon, or 2 rounds and an unarmored loading assistant to reload if suit mounted.

3. Gear of Transport - a greasy steel gear set inside an ornate platinum and diamond cage (worth 1,000 GP).  The gear is a magical item directly connected to the spirits of the Apollyon (perhaps even the central ordinateur).  It is a one use magical talisman that will answer the fervent prayer of its user and up to three others touching him to instantly teleport back to the central shrine of the Ship Spirit Sect in Sterntown. The transported persons will arrive with everything they are personally carrying or wearing.

4. Revitalizing Oils - 3 syringes of a amber colored oil.  If injected into a wounded creature they will act to cure 1D8 HP the first round and 1D8 HP the second round. They also fill the patient with euphoria, counteracting fear or paralysis effects.

5. Ring of the Deep Way - Appearing as a rust and brine encrusted washer, this item holds a powerful enchantment allowing the wearer to draw breath and sustenance from the very decking of the Apollyon.  The wearer no longer needs to eat or breath while touching the hull, though unless actively holding her breath will continue to do so.  As such the ring can be used to operate underwater or avoid poison gas (if breathed and expected).

Prolonged reliance on the ring will slowly transform the wearer into a soulless automaton, and after a month of continuous or near continuous use the wearer's appearance will become that of a polished metal automaton, and her personality will shift until she is a calculating creature of true neutrality and rationalism.

6. Anchor Chain of Memory - a thick belt of heavy square chain links forged of some kind of ancient bluish alloy.  A padlock provides a clasp (and can be locked with a simple key).  The belt more firmly anchors spells within the mind of the caster, and will allow up to four levels of spells to be retained after casting.  To retain a spell the caster must succeed on a wisdom check after casting.  For each spell level over Level 1, the caster must add a penalty of two points to the retention roll.