Tomb of the Rocketmen - Locale Ideas.

Tomb of the Rocketmen is winding up and I've gotten a fair number of maps submitted, so here's a sneak peek at what I've been doing to prepare for the PDF.  Not all of these ideas will be included I fear, it's a bit much for an adventure with ten to twenty keyed locations.  Additionally I don't want to give too much away while people may still be plugging away at their maps - but here's what's been stewing about in my head. 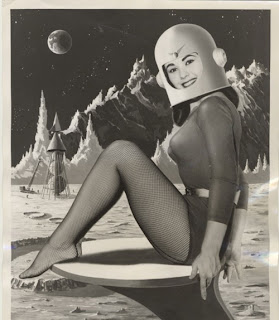 1) Feh Ling the Verdiginous Dragon Spawn - Feh Ling is a fairly large Verdiginous Dragon Spawn, the offspring of the Great Dragon of the Eternal Fleet, whose presence rots and decays the Western Sea. Feh Ling was recently driven from his lair by his draconic parent, as a potential rival, and has been drawn to the tomb of the Rocketman Tombs to begin the creation of his own desolation. He was able to bypass the tomb's interlocks due to his own nature as an embodiment of mechanical decay.

The Dragon lairs within the tomb's recesses and has already begun to accumulate a horde of ancient technology, valuable materials and treasures that will rot away beneath him, to eventually form his own Verdiginous brood as he sleeps and dreams of famine and decline.  If unchecked Feh Ling will turn the area Southwest of Denethix into a desolation of rust and rotted moss choked forest from the Livid Fens to Mt. Rendon's Southern Approach.  Feh Ling already plots the destruction of Tarryfield, and the eventual razing of Chemfoldshire within the next year, and within the next eight month will become too powerful for the Unyielding Fist or any other nearby Wizard to dislodge.

The dragon is a monsters of cracked copper piping, gears and rusted plating in a shape most closely resembling a bat-winged plesiosaur with a set of arms above it's forward set of fins.  Feh-Ling should provide a dangerous opponent for adventurers up to 6th or 7th level as he is both magic using and capable of breathing a cloud of deadly corrosive gases that destroys both flesh and equipment.

This is my chance to use a Science Fantasy Dragon, specifically a reskinned Green Dragon of considerable power - not the sort of thing players will expect within an ancient tech tomb.

2) Feh Ling is, much to his delight, ignored by the Tomb's other residents, deadly space fungus colonies that has emerged from stasis in a rocketman's casket and now infests the majority of the complex.  Incredibly hostile to earth life, the fungus has reanimated many of the deceased rocketmen in the form of withered zombies that carry deadly spores.

The fungus and zombies ignore Feh Ling, as he is a mechanical entity, and he encourages their growth as both guards and representative of the decay that animates him.

Yup, another classic monster reskinned into a science fantasy classic. These are Yellow Musk Zombies, and a Yellow Musk Creepier.

3) The Silent Sisters - Still sealed in the Tomb, hidden from Feh-Ling and Space Fungus infestation are a group of Rocketmen clone warriors, awaiting revival.  They are under-equipped, standoffish and violent, but they can provide valuable allies for the party in the battle against Feh-Ling as they are driven by the fanatical urge to reestablish the Tomb's sanctity.  If allowed to survive relatively intact, the sisterhood may present future problems for the party as they ruthlessly carve out a domain.

4) Star Saints - A potential use of either a matter transporter or rocket ship linked to the as of yet unrealized orbital god, the "Star Saints" a tripartite deity comprised of Saint Yuri, The Holy Valentina, and Armstrong the Blessed, that will transport a party member or members to a small orbital requiring activation.  A cleric will be subsumed by the deity and the player may replace him with a robotic avatar of the newly formed orbital god, while a fighter in the party may be granted the opportunity to become a paladin of the "Star Saints".
Posted by Gus L at 12:12 PM