A Table for Wermspittle - "Those aren't worms!"

Recently I was talking with J. Garrison of Heriticwerks and I mentioned how much I liked his Wermspittle campaign setting.  The entire game is set within a crumbling ruin of a strange baroque city.  Lots of slime and terror, a disturbing cross between Virconium and Gormenghast I guess is the best way to describe it.  In talking I also mentioned my desire to do a table for some random Wermspittle content.  So here it is...

In the alleys and cellars of the ruined district, wriggling in the dust or surging from the bloated corrupt flesh of a corpse, you find it ... and soon realize "Those aren't worms!"
Roll a D12 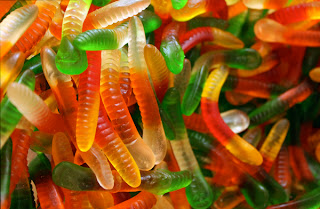 
1. A pouch of butter colored leather rests on the overgrown cobbles of this side street, perhaps tossed aside by a thief, it's mouth gapes and several pale things move within, like inchworms.  Upon closer inspection, those aren't worms, those are severed human fingers of pale cankered flesh, animate with abdead vigor.

2.In a dusty niche of a small crypt something glistens writhing slowly on a blackened skull.  Those aren't worms - rather, the ancient skull of a courtesan still wears a piece of animate jewelery from far fallen Bal-Ibinoth.  The bejeweled and golden wires seek a fleshy body to decorate, and will adhere themselves to the first warm, unprotected they touch, tangling into and around the flesh of their host. If the jewelery remains unactivated (or is recovered with gruesome damaging surgery - 1D12 damage and save vs. paralysis or lose 1 point of DEX permanently to scarring) it is worth 500 +1D4x100 GP.

3. Glowing as they wriggle amongst the dry moss of a broken wall, those aren't worms.  Motes of  the future, glowing with possibilities and crawling back through the drum head thin demarcation between the now and the what may be.  A highly sought after commodity, they may be devoured like bon-bons, each revealing a moment of contingent possibility, those who seek them rarely report glimpses of happiness however, and even then it is a fleeting and insubstantial sort. 1D12 possibility motes worth 25GP each.

4. White and skinny, a myriad of thin strands are weaving themselves about the head of an unconscious drunk.  Those aren't worms, they are the animate fragments of string that act as scouts and hunters for Huril the Muscle Thief.  Soon they well have encapsulated their prey in a cocoon of dirty white string and hauled him into the eves of a nearby tenement.  The enormous rag shrouded Huril will come along in several hours to harvest the fat and muscle of those trapped by his pets and graft it to his own, leaving behind a flopping living skeleton in sagging crudely stitched skin.  There may already be other victims trapped nearby.

5. Waving as if in the breeze, bright maroon tendrils jut from a rich looking patch of earth amongst a few clumps of vibrant spring grass.  Those aren't worm - they are the lures of a large angler crab, growing from the belly of 150lbs of rust colored armored truculence that has burrowed beneath the grass.  It lies on its back with its twenty spidery, razor edged legs ready to snap shut like a trap over any living thing that investigates or prods its tendrils.

6.  A thick glass jug sits half submerged in the muck of a drain.  Beyond the blued glass lazy white tubes churn and flex win a yellowish liquid.  Those aren't worms.  Someone has lost a bottle of alchemical sustenance. This potion may be consumed without injury, and despite its foul taste the artificial organs within will allow an individual to consume almost any substance in place of food gaining proper nutrition and sustenance for 1D4+3 months before they become saturated with toxins and void themselves. Rare and valued at 200 GP.

7. The chest of a dead man, naked save a pair of rotten boots, dessicated and propped against the rear wall of a burnt apartment, moves almost imperceptibly with something writhing beneath the skin.  Snake like patterns curl under his flesh, those aren't worms, they are a sign of forgotten gods. If prodded or searched the lines in the chest of the corpse will suddenly snap into the form of a cursed sigil, one of the 56 lost octagrams of the tomb gods.  Any creature that can see within 20' of the octagram will suffer fear and insanity (Save vs. Spells or flee for 1D4 turns - and forever after develop a mild paranoia or phobia).  After activating the sigil will be active for 1D6 rounds and all within the room will require a new save every round to avoid its effects.  It will become quiescent afterwards, until disturbed again.

8. Amongst the broken boards of a migrants cart, something shifts and an old overlooked cask clatters to the cobbles and shatters.  From within the cask, pink lengths of something greasy and sausage like flop about onto the street, hissing and bubbling.  Those aren't worms, the cask was filled with fermented meat sausages, now cascading into the street propelled by the gasses of decomposition.  It's unlikely the sausages aren't deadly with botulism and worse, but washed clean of the rotten jelly they were stored in they might be food-like enough to sell to someone desperate as an exotic preserved meat.


9. Filthy grave soil covers the felt overshoes of the next man over at the bar.  You can't help but stare, and wonder if that's a tooth, and if those thin clear filaments are grave worms... Those aren't worms those are they?  Any half-competent necromancer or medium could tell you they are the tendrils of a giest, too large to fit inside the body it has stolen, and undoubtedly both dangerous and predatory.  Looking up at the suspected grave robbers face, you realize the slackness might not just be cheap intoxicants, and the deadness in his eyes isn't just metaphorical.  He is regarding you now, and from his eyes' staring depths so is the giest - does it know that you recognize it?

Greater Giest AC 0, HD 10, ATK 4* DAM lash 1D6/lash 1D6/lash 1D6/lash 1D6, MV fly 50' SV CL10, ML 10
*Giest Attacks drain one level each hit, and if two attacks strike the same target the Giest may attempt to enter the new host, the next round make a grapple roll using Wisdom instead of Strength (D20 Roll under WIS by both Giest and victim - better success wins).  The Giest has a Wisdom of 18 and if successful takes over the target as a Giest Host, killing it within 1D4 days unless exorcised.

10. Flitting in a shaft of light down a narrow roofed alley, gossamer ribbons of some substance attract and beguile closer examination reveals that those aren't worms, they are fragments of some kinds of spirit stuff, torn and leaking into the world as if rent by huge and wicked claws through the surface of reality.  They are inert, but may represent a leak of somewhere else into the here and now that could broaden and become dangerous at any moment.

11. Still and brittle in the dust these grey and bronze tubes look like inert insects, but those aren't worms, they are thaumaturgic caltrops, a cruel and inaccurate tool of the most wealthy and callous assassins.  Each of the 1D6+3 narrow bronze and grey metal twists will dart into the flesh of anyone who comes within 10', attacking as a 3HD creature.  The caltrops are so small they don't do any direct damage, but each will inject a powerful poison.  Those struck must save vs. poison or die for each caltrop that hits.

12. The soft ground shows many small burrowing tracks, as some as thin as a thread, and others as large as thick as a child's finger.  The tracks zip and twist around each as if a lively writhing mass is just below the surface.  Those aren't worms, the tracks are the result of numerous tiny elemental sprites, the elemental earth equivalent of gnats.  They are harmless and insubstantial, likely the backlash or side effect of a larger summoning from the domains of stone and soil.
Posted by Gus L at 12:53 PM