Dungeon Moon Character Sheets
So I’ve been playing Nick from Paper & Pencils’ game on his rather unique setting “Dungeon Moon” intermittently for quite a while now.  The setting is a huge funhouse megadungeon, but with a better setting explanation then most.

The character I originally made as a joke “Makepeace NoHells”, who I originally suggested was a “Atheist Paladin” has turned out to fit the setting quite well as a militantly atheistic warrior.  Militant atheism being rather appropriate to a campaign setting where numerous extremely unpleasant demi-gods run about being nasty.  Makepeace is a fourth level fighter now and wields a dangerous magical axe that slowly fills with power from killing creatures, gems on its haft glowing as it becomes stronger, until the wielder channels this power into a single huge blow.  He’s a dangerous lunatic these days, having successfully slain (or at least trapped) on of the gods of the dungeon moon and returned with it to his strange cannibal cult family compound.  Equipped with the finest plate armor available from the cult armory and dependent on his unnatural dexterity Makepeace has become very hard to injure, making him an effective frontline fighter and door opener.

Above is the character sheet I drew of Makepeace during the last session, after Makepeace had a magically induced goblin fetus surgically removed (there are actually rules for surgically terminating demon pregnancies in LOTFP – just saying) by the party’s other fighter, Zoad the musketeer.

It  was also recently revealed, thanks to a magical magnet trap, that the reason Makepeace constantly wears a sinister full helmet inscribed with the ‘null’ symbol denying the existence of gods (foolish really in a game where there are clearly evident, actual demi-gods roaming about) isn’t just devotion.  Despite normal human intelligence and a manly enough voice, Makepeace has the grinning round face of a large baby.  The product of genetics both inbred and tampered with by wizards in the last few generations has made the fighter a freak.

After a few adventures, when Makepeace’s party kept emerging from the tunnels under the rocky surface of the Dungeon Moon with food, valuable and glory. His family/church has allowed him to bring along one of their most promising young preachers  as a henchwoman.  Sister-Aunt Killsin NoHells is a first level cleric of the ‘human’ spirit (though human can be switched out for whatever sentient species is currently behaving in a friendly manner).  She’s been an effective henchwoman, and has used her habitually memorized ‘command’ spell to rather good effect.

I've drawn up two of the other Dungeon moon party members. I've tried to keep a consistent weird fantasy look to the equipment and citizens of Dungeon Moon, which is less Tolkien and more Orphans in the Sky with magic instead of technology.

Bansho, Save vs. Total Party Kill blog's Specialist who began Dungeon Moon as a "chimney sweep", with specialties in climbing and stealth, but is now pretty much your standard bow shooting, trap detecting, monster hunter.

Zoad, Nercopraxis blog's gunpowder based fighter, who has proven rather dangerous with his variety of bombs and black powder weapons.

LOTFP Blank Character Sheet
Below is the blank character sheet I made up for Dungeon moon.  In the style of the old Champions 2nd edition sheets you can fill in the features and equipment heroic cannibal within the dotted guides, and draw his equipment directly onto the sheet to track it. 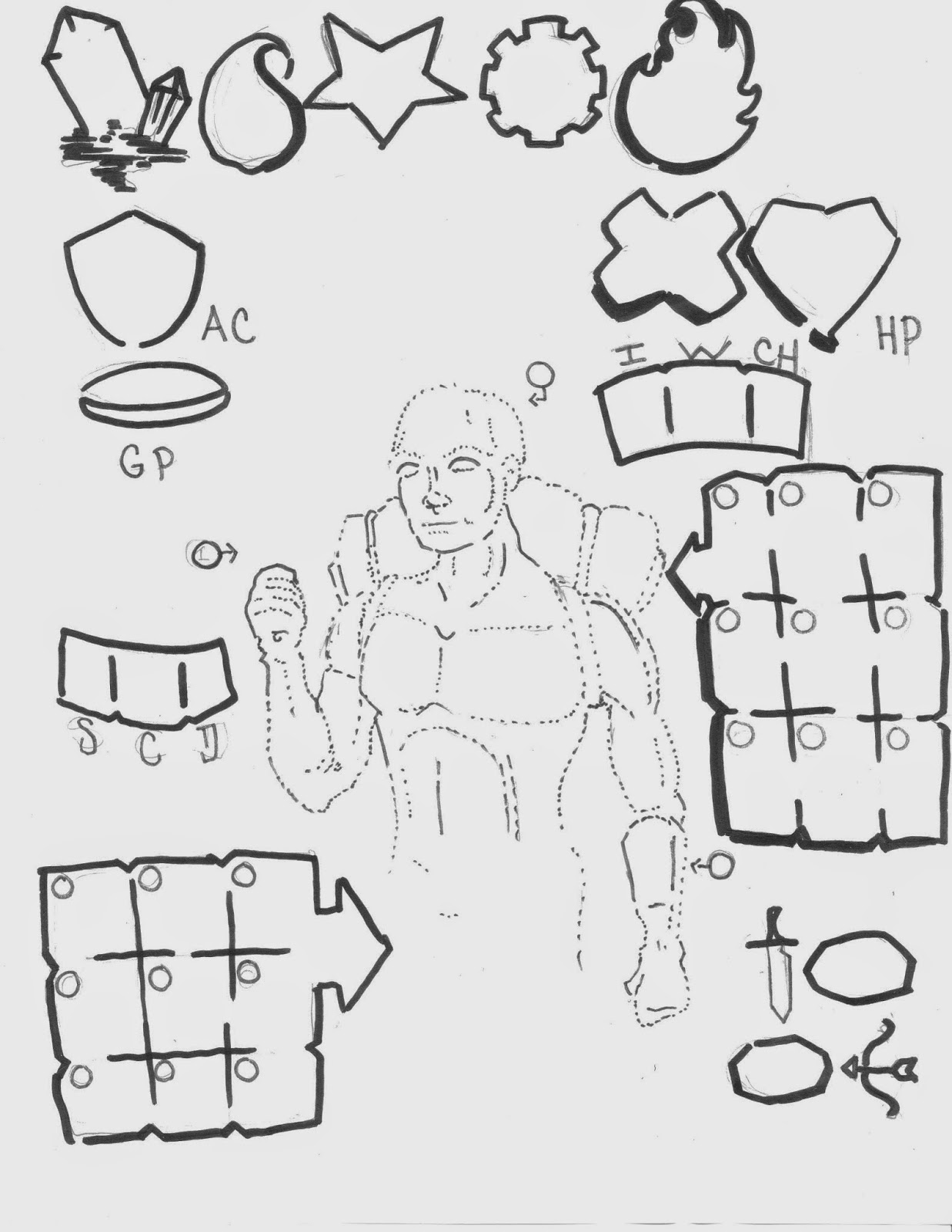 I like this style of sheet because it really does contain the minimal amount of information required to play with, and I think gives a good visual representation.
Posted by Gus L at 5:25 PM