HMS Apollyon - The Dead Part I

One of the most dangerous forces aboard the HMS Apollyon are the so-called 'Bloated Dead', also known as "Steerage".  The source of this army of undead, whither it acts directed by a greater force and what exactly can be done about it are unclear - but the destructive goals of the bloated dead are clear as is there implacable nature and ability to corrupt almost any form of life into dangerous unlife.

One commonly encountered form of undead aboard the Apollyon, less dangerous than the bloated dead themselves, but more dangerous than a standard shambling corpse are Zombie Sharks and other sea life, transformed into hungering monsters of decay by the dark necromantic waters of the steerage decks.  Undead sharks are the most common form, though almost any form of sea life can be found aboard - the bloated dead attack on the port side machine shops was supposedly spearhead by small undead kraken that breached the deck plates beneath the Stewards' main redoubt and is rumored to have been responsible for the near annihilation of the Marine Schwerpunkt prior to the fateful battle of the Devil's Tombs.

Zombie Sharks are behaviorally almost identical to sharks - ever hungry killing machines fueled by unstoppable ferocity.  The main difference is that they are indifferent to injury and do not require water to survive, sometimes chasing their prey into unflooded areas by wriggling across the deck plating.

The only indication that Zombie Sharks may not simply be a terrible side effect of sea creatures exposure to necromantic waters is that on some occasions they have been used as mounts by other forms of steerage aligned undead.

Shark Zombies are enormously resilient, but are not much more difficult to turn than regular zombies, turning as 3HD undead. As undead they are of course resistant to sleep, charm and other mind effecting spells. 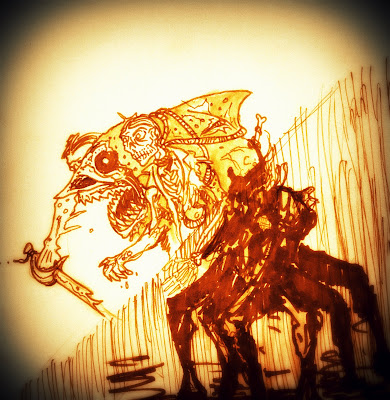 A disturbing algem of human body parts and shark parts tangled together by ropes, chains and rags the Chum Horror is sometimes thought to be a consturction of Bloated dead necroarchs, a recycling of broken parts and shredded souls into something both pitiful and horrific.  It may also be that the when a zombie shark devours its victims they rise within it and crawl their way through its flesh, blending and melding to create these undead nightmare predators.

Chum horrors run forward on multitude of borrowed legs and bite with a central shark body while clawing and grabbing with various twisted limbs that protrude around this central core. Chum Horrors' terrifying countenance causes fear in Creatures of less than 2HD and they possess the normal undead immunities.