Hastily written on scraps of several documents, including a burnt out sleep scroll, and sent by fast carrier to the cities of the West.

I suppose I am becoming one of the locals here, slowly sliding into the vices of the frontier and gaining its callous virtues.  I have been drinking rather much of late, and killed my fair share of men.  I think one relates to the other, and I claim medicinal need for the alcohol as I am currently recovering from a wicked knife wound to the thigh. 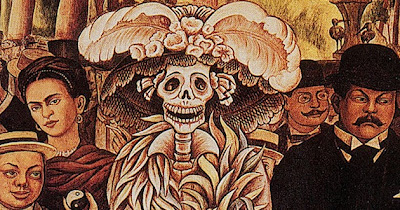 In better news me and the lads have taken over the abandoned and rat ridden house we cleared a week ago, as money is short and there is no law here.  I used my study of bones to identify the skeleton we discovered in the basement as the former owner - a hedge wizard known as Fearless Feagle and well like around town.  I suppose when I am a bit more flush I will throw him a wake and reveal that his own rodent based sorcery and/or his former partner did him in.

I have so many plans here -  the witches of the Wampus are powerful, and seem gullible to the wiles of civilization.  The locals are both afraid of them and depend on their aid.  It is my opinion that an intelligent man could make a good living for himself and his family acting as a consultant and go between in witch related matters.  Furthermore, with the death of Feagle there are no consulting wizards in town, and even my relatively limited ability to craft spells might allow me to build a clientele.  Another bit of good news.  The former occupant of this home left his old spell-book behind and I was able to transcribe a set of interesting spells, some beyond my current researches including one that appears to cause a spray of fast hardening rock candy to erupt from the caster - the strangest of them (a transvestite transformation) I was able to trade with a traveling wizard of some power in exchange for a pair of useful divinatory spells (which could be very profitable).


In order to make these plans pay I will need capital.  As such I ask that you hurry the sale of the art pieces I sent for auction and transfer the money as specie as soon as possible.  These opportunities will not wait.

I have not been lax in the search of additional capital, my companions and I resolving to return to the cult hunted crypt and confront its ghostly overlord.  Mr. Early was unable to venture forth as he must practice his cards for the upcoming tournament (I suppose I and the others will be expected to prevent cheating and such and stand as his second any duels that result from play) but the snake preacher (after blessing some bullets with his god's dubious powers), the barbarian spear-man and I were ready to seek out the mysterious ghost known as Gristle and destroy him.  I met a likely assistant at the bar, an intelligent ape of prodigious size, and armed with a unnaturally large sword - we shared a few drinks (as I mention the vice grows stronger), and I traded him my old pistol for some money to create a scroll.  The gun looked comically small in his massive ape paws, but I think the ape figured to sell the unfamiliar item at a later date.

The others had met with a powerful warlock of some kind and the lot of us agreed to enter the tunnels described by poor Cobweb, the cultist we rescued.  Cobweb is doing well enough I suppose, having taken up a job as a waitress in a local saloon. If my business ventures go well I may see if she has any ability with the arcane arts and encourage her to aide me in my researches.

Our band set off, with the orange ape leading the way.  We entered the tunnels, ready to battle the ghostly gentleman, but found only a large room filled with buffoonish thugs in skull masks.  Using the scroll I had prepared I quickly all but one to sleep, and he was dispatched by the warriors among us.  We tied the men up, despite the warlock's bloodthirsty admonitions to slay them and began to explore.  The chamber was filled with excellent frescoes of a far more uplifting nature than the skulls I sent, but of similar age. I believe I may be able to recover them in time - please find out what the market rate for an approximately 150ft by 10' fresco of a necromantic cult paradise in intermediate condition and likely requiring reassembly might be.  I estimate it a 500 years old.

Our band moved onward, the brave ape taking the lead.  As we were about to venture forth, Iornwall, the spearman (who I have come to trust in a fight), darted into the hall and encountered two more skull masked men.  A quick battle commenced, ending with the bludgeoning death of one man and the ape assisted capture of the other.  The captive was unhelpful but we tied him and led him along.

In the next chamber, the one we had encountered the corpse brides and Phineas Gristle in on our previous visit, our ape companion heard the noise of a cocking gun.  No the less we burst through.  Cultists waited in ambush.  Me and Ornibus both shot true and two corpse brides lay on the floor.  One seriously wounded by my bullet and another slain by the preacher's.  Three more of the brides were firing from concealment and one shot took Ornibus in the gut.  A second shot ripped into the Ape, who turned and fled at my urging, though not before killing another bride, as a larger group of cultists was spotted surrounding the large amber block.

The warlock tried to invoke the winds of sleep, but the distant cultists were unfazed.  Our melee fighters charged forward, Ironwall clubbing a rifle armed bride down with his spear butt and the Orangutang killing another.  The warlock ran forward and spat a stream of enchanted webbing at the distant cultists and snared all but two.  The remaining bride rushed at me and gave me the wound on my thigh with a jagged bodkin, and my attempt to pint glass her with a flask of oil failed as I am out of practice.  Seeing the battle almost won the Orangutang returned and batted my attack 1/2 way across the room.  She raised her hands in surrender and the battle with the seemingly undead cultists in the rear quickly came to a bloody end.

The party examined the 'dead god' in his amber tomb and questioned our wounded captives - who revealed that gristle was 'out'.  A quick trip into what Cobweb had called "The Screamatorium" rapidly became horrifying as it was revealed to be home to a strange trapped entry with the voice of a little girl.  The voice tried to lure us down a steep ramp, and demanded bodies, but it soon became apparent that any living or recently deceased thing in the room would be consumed by flame.  A cultist corpse and then an undead cultist were pushed into the magical crematorium and quickly consumed. The several inches of ash on the room's floor took on a terrifying aspect at this point, and unable to see a way forward the group abandoned the caverns - smashing the amber block on the way out.

Addendum, unwritten for obvious financial reasons... The amber tomb of the "Dead God" was shattered and reduced to numerous shards of amber.  A mad scramble ensued and the party filled ever available pack with chunks of orange stone.  The body within dropped free, revealed to be an ancient simian mummy.  Chauncy's education allowed him to recite the old maxim - "Both for Man Ruled the Earth it was the Domain of the Apes".  With both ape and amber the party emerged from the tunnel and returned to town, rich beyond reason with amber chunks.  Chuancy is also now a Lvl 2 wizard - and his first plan is to buy a sign and fliers advertising:

"Chauncy Woolstrike, Master of Thaumaturgic Studies, Bachelor of the Necromantic Arts, University of the Western Kingdoms, Member of the Order of Eyeless Owls - Consulting Sorcerer

NOTE II: Orangconan a barbarian ape built with a seemingly solid set of rules for the Orangutang class was ably played by the fellow from Monstrous Television - who also seems to make neat 1990's zine style maps. I enjoyed his take on simian adventurers and do hope he becomes a Wampus regular - I have unilaterally decided that wizards love ape/monkey minions so that might cause some friction as Chauncy has begun to slide into sorcery induced megalomania.  My own take on a Flying Monkey Class may be related and explain some details...