The Old Brewery - Why we fight.

THE OLD BREWERY - ADVENTURE HOOKS AND A NOTE ON SOURCES 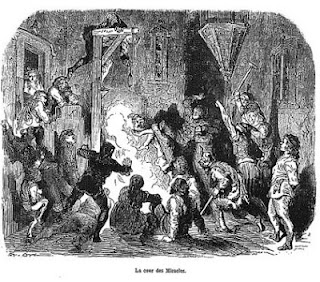 This adventure location is a vile urban nightmare, but it is based on an actual location in 19th century New York, that according to the hysterical imagination of its times shares some topographical/name elements and a general environment with the fantasical location I've written up. My primary source is Herbert Ashby's Gang's of New York (itself fodder for many an adventure), and Luke Sante's more studied “Low Life” on the same topic. None of this matters, but if you like this adventure it owes a lot to the purported actual character of early American urban life (with added grunkies).