Now tonight the party got a big haul, and lest we think it's too big, they've been working towards it for a while.  It's interesting to me as a GM because the adventurers basically snuck into the back door of a subsection of the dungeon by utilizing unexpected methods to open a door I thought of as one-way.  They also pulled a bit of thief-fu on another locked door - and I guess the lesson is, as in real life, locks don't protect against anyone determined to get past them.  Still they also overcame their fear of a creepy phantom and generally prepared right to take it on.

Sem, The Cleric From Beyond (C3) - A heavily muscled priest of an unknown god. 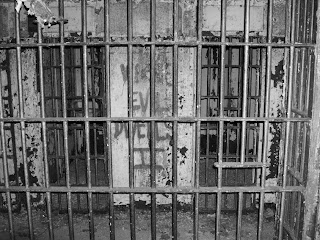 Found among the unquiet Dead:
Assorted jewelry (including one pocket watch worth 60GP) - 900 GP

Large Wooden Crate
A pile of rotten Finery
Two fine outsider beast furs, magically preserved (600 GP each) One appears to be made of ice shards, but is amazingly warm and the other is a thick, oily feeling black fur - 1,200 GP

Golden Stewards Badge - 50 GP if sold, it is old, from the Apollyon's heyday and might make a nice gift to someone interested in the Stewards.  Also Vess's identification of the Skeleton was wrong (based on the armor) - the strange glitches of time aboard the Apollyon.  The Stewards are happy to have their dead back, but it's not a big favor or worth a reward.
100XP

Bag of Bones - The dead who's dying wills formed the 12 skull phantom.  Vess can chat with a few of them and learns the following - they were refugees 40 years ago, fleeing the undead onslaught that culminated in the battle of the Midship Shops and the Devil's Tombs.  They were trapped in the substation, already starving, locked in and seemingly abandoned by all but a few of the Stewards that were with them while trying to escape to the Stern. They died suddenly, when a massive explosion came from the direction that is now the buried vault.  They know that the Steward Captain that was with their group had committed suicide in an office upstairs the night before and that a few Stewards remained in the front of the station trying to hold off the vanguard of steerage dead minions.  Vess can make a list of names, but most of the families are extinct (as is the entire 2nd Class as a caste) and there is no reward for the bodies.  Properly burying them at sea or by cremation will lay them to rest and gain the Cleric(s) who do it an additional 50GP each.
300 XP

Delivered the Vory Note - No idea what it said, but supposedly the Vory or possibly just Madam Interuvibibi owe you money or a favor...
300 XP

Merrow Men's Package - Beneath the odd living skin wrapping, which shrivels off when uteid, is a plain note written in large clumsy letters - presumably from the Merrow Men Shaman and Chief.

"Invaders of Homes, Slayers of Families and Plunderers,

Though you have invaded our homes and slain or brothers and sisters, you were the first to do so, and because you have not returned clad in fire and war we, The Bone-Eye People, will treat with you as we believe you do not seek war, as we do not seek war. We have wronged you as well, in killing your digging brothers when we came upon them.  We did not know what we did, believing them to be the Flesh Eaters that live above the passage.

That peace may return, our people will leave our homes, but ask that you give us time - no man in the buried vault will be attacked by Bone Eye if he wears a white ribbon on his arm, and does not seek to enter our tunnels or harm us.We will be gone soon, while our strength is still great enough to go into the hull.

We ask that friendship and peace may grow between us for an exchange of gifts.

Bring us the head of the burner and destroyer in Silver armor who came with many men, but left almost alone.  Leave it at the place this letter was given and we will bring you magic beyond your knowledge."
200 XP for this strange turn of events and restraining your murderous impulses

Only two new rooms explored, but the way is now open to the rest of the Substation (apparently) - 100 XP
Overcoming your fear of Ghosts - 200XP
Protecting the Steward - 200 XP

Mapping XP - For the map of the Substation - 40 GP/XP for Each Mapper (80 for cartographers). This is for both this and last session.

The Exalted Gear Brothers of the Ship Spirits - Led by Brazen Gear (CL 2), twelve strong, funded by Lady Stott (CL 6)  Well they killed some Merrow Men in the buried vault - just a small patrol while guarding the player's party and got a bit of cash from Mechamn out of it.  Then they went off to the Mushroom farm to tour it with their boss 'Lady Stott'.  Starting to investigate the Pump room they came across the Strangers (Below) burning the Crawling Death polyps in the room and fighting worm things.  They notice a door on the room's far wall, but left due to the smoke.  Decided to move to the Auxillary power area and slaughtered the cray dogs.  Also activated 2nd power machine - More lights in buried vault, and pumping sounds are heard in the Mushroom farm. Discovered some trinkets and believe they have secured the Power Station Area - except for the upstairs... Discussion of "Retaking the area", including the Mushroom farm.

After a meeting with the Steward boss, Mechamn and a mysterious guest, wherein a secret is revealed,the party is bounf to escort a Gunner and an Engineer to the gun the discovered last session.  The Engineer, Mr. James is a frail man, who celarly does not with to enter the hull, wearing a brown suit and dress shoes and toting a comically large pistol and a clip board.  The Gunner, Sargent Timmons is made of harder stuff, and arrives clad in platemail, carrying a large shield, rifle & sword.

Setting out with the Steward and Engineer in tow the party notices that the Gearmen are also massed at the gate preparing to exit, and are uncharictaristically loud when thye do.  None of the protagonists decides to ask the Gearmen anything, despite Brazen Gear's pregnant nod as they pass.

The band quickly escorts their charges to the hatch entry into the Steward station and planning on using the steam beaver (Quartle's familiar) to open it intends to hide it from the Stewards.  They fail, only because they discover the hatch is open, and Buck Naked Graffiti painted all over the chamber. Frightened that a pack of nudist cannibals have beaten them to the prizes within the party rushes into the cell block and spots three bodies, apparently Buck Nakeds, scattered about the room.  Vess decides to approach a corpse, but as he does so it rises, revealling face and hands melted into black slime around hard white bone.  Sem charges forward to face tow of the dead menacing Vess, whil Elsie rushes to meet the other.  In the melee that follows one of the corpses is positively peppered with shot and arrows, but still manages to thrust its boney claws into Sem's throat and paralyse him.  The party still defeats the horrors, and moves onto the gunroom.

Inside, a search by the Gunner reveals the rifled cannon may have a value as high as 5,000 GP and turns up an old Steward's Carbine.  The Engineer also does his job, and mumbles to himself about taking a wall down.

As the party is wrapping up, a noise form the hall prompts Elsie to investigate and she finds a floating skull making disconsolate moaning noises.

When the skull charges, despite her attempts to speak to it the door is slammed and the nervious Steward begins to make his escape.  The party quickly returns to the Rust Gates, meeting thee Gearmen, who reveal that they were tasked by Mechamn to make disturbances to protect the party and their Steward charges.


Ghost Busting and the Big Score

Back in the hull the adventurers resolve to protect themselves with fell magics and try to lay the phantoms to rest in the Steward station ready room.  When they enter the party is met be phantoms pleading confused and repetitively for answers.  With Vess speaking to the Dead and the Clerics trying to collect the bones of the dead (especially the skulls), the party is able to spend a few rounds before a frantic phantoms turn on them.  The battle that follows is strange with the skulls biting, and seemingly ignoring armor, while every strike of the party shatters one of the skulls into oblivion.  The adventurers quickly prevail, but some get gnawed in the process.

The phantom finally collapses and Vess can feel the necromantic energy leave the room.  At the urging of Thalia and Sem the adventurers begin collecting and bagging the bones of the long dead refugees in the room. While completing the task they discover a large amount of jewelry and coin.  While each individual item is not simple and not particularly valuable - in aggregate the gold is worth a considerable amount.

Looking around the room, the party decides to head South through an open hall, rather then try the Southerm door or climb a set of stairs along the North Wall.  The hall has small rooms off its West wall and a spiral iron stairway heading up, but the rooms are devoid of interesting items and appear to have once been interrogation or interview chambers.

At the end of the hall is the stations entry, the room itself is buried now,  with windows now blotted out with debris that once looked onto the buried vault. Behind a central counter is the skeleton of a Steward, still in armor and clutching an empty shotgun.  The party attempts to speak to him, but his spirit is long gone.  Elsie looks around trying to figure out what killed the man, and discovers that his ribs are broken under his banded mail.  Bullet holes also pock the Southern wall across from the counter,  The skeleton carries a key.

As the adventurers search the skeleton the notice a small form in the Eastern half of the room.  A one armed Merrow Man carrying a white flag.  Vess approaches and lays a note given to him by Sterntown's gangsters at the Merrow Man's feet and it hesitantly takes the note,  exchanging it for a skin wrapped package,  The creature flees South into a tunnel carved into the trash outside the windows.

Correctly thinking the key is to the station's weapons lock Quartle rushes back to the armory.  The key fits, and amazingly Sheriff Roscoe is able to pick the second lock.  The armor is open.  Within is a single gun and a number of wooden crates filled with weapons and valuables - the first big score aboard the Apollyon!