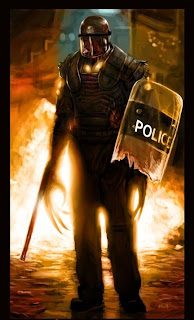 Gold etched/plated saber, in fancy electrum sheath,  - 500 GP
A fine weapon that won't rust, but without bonuses - as longsword (1D8) - has stewards crest and anchor decorations, might make an impressive gift for any steward officer.

The Revenant's Mad Scrawling - One adventurer's lucky roll found a set of the earliest 'diary' pages of the shame revenant/former steward captain.  This reveals the true sad story of the retreat from amidships.  Battles of attrition against waves of undead - a population of 40,000 reduced to 5,000.  The Captain's band at the tail of this particular retreat and trying to decide where to stop running, but burdened by weak and sickly refugees.  The battle for the Stern train depot going terribly wrong when Sterntown's Karcists summoned too many and too powerful outsiders who broke free and rampaged through both the human defenders and undead attackers. Finally the decision to blow the vault, possibly trapping stragglers and certainly trapping a small group of the Captain's own men and one remaining marine trooper on the other side of the buried vault to assure that the dead couldn't disrupt the demolition. An endless battle against undead leakers, sneaking through the side gangways and finally the explosion that was too big, too deadly (at some point here the Captain committed suicide, but apparently resumed writing not long after) and then a descent into delusional maddess that the battle was still being fought to protect the buried vault. -100 XP for making me think up a darn depressing narrative.

Magic Pistol -The pistol is a weapon known as a "phantom gun" (though it is in no way related to the dead or undead) and appears as an ornate revolver made of solid silver with inset gold runes.  It has no barrel or trigger, but the chambers of the revolver are separate and spin normally.  When pointed at an enemy with the desire to fire the weapon a ray or blast of elemental energy manifests at the front of the pistol and hurtles towards the deisred target.  The weapon is identical to a normal revolver of a similar size, firing twice a round, save that it 1) does 1D6 +1 damage per shot to all non-elemental target (non-aligned elemental enemies are often immune). 2) The never needs to be reloaded (though after many rounds of combat it may need to rebuild its energies for some length of time). 3) The gun can harm many supernatural beasts immune to non-magical weapons (up to +1).

It is worth at least 10,000GP to the right buyer (no XP) but you are unlikely to sell it for that in the cutthroat world of the Apollyon.  Snee will give you 2,000GP.﻿

Merrowman Badges - The Merrowman Shaman provided living badges made of teeth and pseudopods to show your status as friend's of the tribe.  Not sure what that means - Merrowman politics are little understood I fear.  Still it's kind of a neat artifact and pretty cool to show off at the pub. Additionally the badges should let you traverse Merrowmen territory in peace. 500XP


Solved the Mystery of the Substation - such as it is, and explored the whole thing, massacring its undead inhabitants and totally tidying up that area - 500 XP

Mapping XP - For the map of the Substation - 150 GP/XP for Each Mapper (300 for cartographers)for the complete map. Nice work.

The Exalted Gear Brothers of the Ship Spirits - 15 Effectives, Led by Brazen Gear (CL 2), Have brought in some scary looking "Devouts" from the main shrine, and joined up with the Mysterious Criminal Strangers (Still 8), possibly paying them for aid to prosecute a brutal and bloody war against the Buck Nakeds.  Used a satchel charge of black powder and ball bearings to tear up the 2nd floor landing and then ambushed the group coming down stairs to pursue them.  The Criminal Gang was especially effective when they erupted from hiding behind the attack force.  Several Gearmen have died, but the fervor of their cause is making their numbers expand.  At least fifteen Buck Nakeds were killed (none captured for some reason) and even Priestess Stott is getting into the blood feud.  The battle only ended when someone started casting spells at the Gearmen and they retreated.  They're seeking warlocks for counter-spelling purposes now, but didn't get a good look at the caster.

After a brief and confused journey to leave some food for the Buck Nakeds, during which the party is unmolested and noted that the Mushroom farm area is beginning to lock alomst cheery, and even the curling chipping mint green paint of the walls seems less obvious and brighter.

When the band returned to the Steward's Substation, nothing had changed, except the ghoul corpses locked in one of the cells stunk awfully.  A quick search of the station's lower level  revealed a gong newly added to the entry room next to the buried vault.  Upon ringing it a Merrowman scout appeared, and soon the Merrowman shaman Red Water Running Over Bones (AKA Bones) appeared to parley.  He took the note from the PC's new underworld sponsor, madam Bibi, and discussed his desire for the head of Mr. Templeton, who has been lost in the hull for weeks and is believed dead.  He wouldn't explain why the head was important but did provide the information that the area above the power station is dangerous because the furniture and walls there attacks. After giving the party living badges to allow them through Merrowman country Bones departed.

Heading upstairs, the adventurers entered and old locker room thick with black mold and decided to burn it and avoid its potentially dangerous spores.  The choking smoke made traversing the room impossible, and so the party closed the door with a vow to return.  Upon entering the Captain's chambers the adventurers discovered that the secretary's room had been ransacked and destroyed. Quartle managed to pick the lock on the Southern door and the party found a communication's suite.  While Quartle looted the machines for useful power tubes, the rest of the band marveled at an enormous pile is insane scribblings, presumably left by the abdead captain.  Select parts of the pile were grabbed by several party members, but before a more complete search was made, a crashing from the Captain's office to the East jarred the adventurers out of their noisy discussions. Kyrup, who had not encountered the fierce Captain last time threw open the door to discover a redoubt made of furniture.  His attempts to parley with the captain were cut short when Sir shouted something about killing the undead madman and melee began with a wail of unfathomable pain from the reverent.  Both hencemen, Sem and Elsjinn fled under the effect of the magic scream, while the rest of the party closed to battle. It was a brutal fight, but thanks to a well placed vial of holy water smashed down the back of the undead steward's armor by Bumphrey the party eventually prevailed, just as Sem and Elsjinn returned.  At his death the Captain exploded and cursed Sir so that he is a most attractive target to the undead. Bumphrey lay unconscious and the others were injured quite badly, but bandaging and Sir's entire arsenal of healing spells brought them back to fighting condition

Looting the Captain the party found his badge, sword and magic pistol the band explored the rest of the station, finding whiskey and a velvet painting of a famous singer in an old lounge area.  Later a set of good kitchen knives were discovered hidden in a sooty roasting oven.  Finally returning to the Captian's furniture redoubt the party decided to take much of the furniture.

Loaded down with a couch, end tables and chairs the party wasn't able to respond effectively when they encountered six Buck Naked's in the exit corridor.  The cannibal patrol was startled though and Sir got off a sleep spell that dropped four of them.  One of the remaining two men ran, to be shot down by Sem, and the other charged Sir with perfect grace and drove a heavy trident into his chest, almost killing him.  He was slain by the rest of the party quickly and they returned to town laden with furniture and having slain a powerful undead entity.