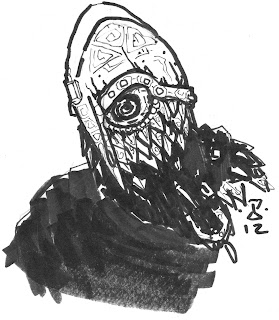 There are plenty of contests loose in the OSR blogosphere right now.  While I am still awaiting the final publication of Wampus Country's summer contest and Secret Santacore has just begun, there's still plenty of contests available to enter and hopefully to read the results of.  I spent a good chunk of Sunday nursing the most gentle of Tecate hangovers playing with a small dog on my laps and drafting entries to two contests.

1) Sorcerer's Skull's Adventure Seed Contest for an upcoming Weird Adventures' Companion, which is exciting news itself. I'm happy with my bootlegging and hillbilly themed entry, basically a table of slightly warped random encounters including a Black Shuck, hillbilly giant wrestlers, ghost bootleggers and various haints.  I may have manged to creep myself out with one or two items and I kind of wish the whole thing held together better, but I really enjoy some of the individual things I came up with and think the thing could have some utility for adventurers who feel like leaving the city (Weird Adventures' version of 30's New York).

2) Ramblings of the Great Khan's Viking Adventure Contest
seems like this might be for the Khan's current campaign, but heck Vikings!  Vikings are pretty awesome so I cobbled up the below one page adventure about pillaging (very Viking) a lawful shrine, but with the justification of laying a powerful undead reaver to rest.  It came out longer than I intended, fitting on a double sided page so I'm not sure if it makes it under 1 page rules - but I don't really care.  It was good practice at squeezing flavor into something with terse writing, and I think the maps, picture (see above) and final product turned out well.  By well I mean it is in the best tradition of crude paste-ups of typewritten text crammed into every available space with amateurish doodles as illustration.

Here's the one about Vikings