Thieves aboard the Appolyon 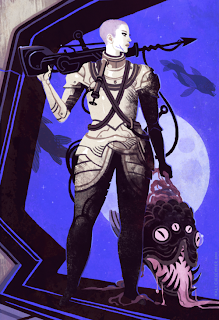 I've been working on this post for quite a while, and frankly it's overdo for my Apollyon players.Below are the skills that Specialist's aboard the HMS Apollyon can train in and gain skills in.  Specialists begin with 5 skill points (with a limit of 2 maximum on a skill to start) and advance at a rate of 3 points per level, but a limit of spending 2 maximum on a skill.

Specialists Aboard the Apollyon

Most Scavengers are not dedicated warriors, magicians or infused with divine power, most are jack of all trades who have a wide variety of valuable skills,  These specialists take on a variety of roles, from light fighters and assassins to thieves, explorers and even learned antiquarians.  I have tried to make the skill set varied enough to include mountebanks, medical students, false priests, wayward sorcerer's apprentices, animal handlers, researchers and engineers - All of whom might find themselves in the hull.

Note: Rules for Fighters are HERE
while rules for Magic Users are HERE

Duelist - Specialists in fighting a single enemy with one-handed weapons, duelist skills are typically gained by gladiators and aficionados of the wealthier fighting academies alike. Duelist skills only work when the Duelist is faced with a single opponent that may attack them that round. Defending, or even considering defending against multiple enemies robs a duelist of the concentration needed to use his skills effectively.

Pugilist - These Specialists are practiced unarmed combat and their skills are only effective when they are not wielding any weapon (fist weapons might be allowable under some circumstances). This discipline includes bare knuckle pit fighters and agile ninja types.


Two Weapons - A specialization that depends on the use of two one handed weapons being wielded, one in each hand. Both hands may wield any one-handed weapon as limited by the below skill chart.

Firearms - Familiarity and practice with firearms generally makes the gunman more accurate and efficient using any kind of powder and shot weapon.


Missile Weapons – Specialists and Froglings often specialize in muscle powered missile weapons, from thrown axes, daggers, harpoons and spears to bows and crossbows. The abilities below may only be used with missile weapons, but become quite lethal as skill increases.

Assassin Not all killing is fighting, and Assassins specialize in the cold art of murder. They are generally distrusted, but their abilities are also sought. While much of what Assassins do is inapplicable to real combat, certain skill shave overlap, and Assassins can become deadly fighters, even if it is simply because they lack any hesitation towards killing.

Light Armor - Training in the use of light armor mostly focuses on making up for its defects. Light armor includes: padded, leather, scale, chain and banded armors as well as back and breast plate. Again these skills only apply when wearing light armor.

Agility - These skills are for Specialists who specialize in fast and agile melee using quickness and accuracy rather than brawn.

Swimming – The ability to act under or in the water very useful aboard the Apollyon, as many of the decks are flooded, and many other areas contain submerged areas.

Climbing – Acrobatic climbing skill far beyond the normal ability of even a practiced climber, this skill allows the Specialist to make their way up sheer surfaces, silently and without tools (though proper tools provide a +1 bonus)

Survival – Survival is the ability to do without and to find what is needed in the wilderness, without regard to the nature of that wilderness – from tundra to jungle, to cyclopean decaying sea vessel, a skilled survivalist will be able to find food, shelter and water.


Stealth – Many Specialists find stealth important to survival. If the goal is to find and collect item of value, sneaking past monsters and beasts is far more desirable than confronting them.


Animal Handling – Animal companions are invaluable within the hull, they can carry supplies, generally have better senses than humans and can fight, some with incredible ferocity. Yet to control and care for more than one beast in the complex situation


Awareness – Working within the hull and facing it's myriad dangers can put a person on edge. This isn't always a bad thing, as a specialist with keen skills of observation can detect things others miss. Traps, Secret doors, Sloping chambers and Concealed treasures can all be noticed with this skill.

Hedge Magic – Specialists often pick up a little bit of everything, including magic. While a dabbler will never compete with a trainer wizard, a little magical knowledge can provide an unexpected advantage to a Specialist.

Appraisal – Sometimes knowing the value of salvaged objects is almost as valuable salvaging the objects in the first place.

Confidence Artistry – Not all thieves depend on quick fingers and stealth, and many learn that tricking, bluffing and charming a mark or enemy can be just as effective as poisoned knives and ambush attacks. By building the skills of Confidence Artistry a Specialist can become an excellent negotiator and leader as well as a trickster or mountebank.

Tinkering – The Apollyon is an artificial environment, and its people technologically inclined. The ability to interact with and even understand mechanical devices is useful. At the simplest levels of skill it can be used to open locks and disarm mechanical traps, while more advanced tinkers can unwind magical or ancient technological wards and plant or disarm explosives.

Huckster Faith – Some Specialists turn to religion as a way of dealing with the horrors within the hull. This group contains unschooled true believers, lapsed seminary students, conniving religious con artist and madmen. Still this skil also often allows a Specialist some measure of access to divine power.

Poisoncraft – A favorite tool of assassins and hunters is poison, and with the Posioncrafting skill a Specialist may learn to prepare poison to apply to his or her weapons.

Medicine – The specialist has learned the skill of medicine or other non-magical healing and aid. With this skill a Specialist will often increase their value to their fellows dramatically as they are able to save them from injury and harm.