One of the oddities of the HMS Apollyon is use of hybrid dogs for almost every purpose another domestic animal might be used for.  That there are 9' tall work breeds and saber tooth hunting dogs aboard is all the more amazing given that the original stock was almost universally lap dogs.  The technological manipulation, thaumaturgic transformation and genetic hybridization necessary to produce these animals is a testament to the ingenuity of humanity in the face of adversity. The relentless focus on scavenging and battling monstrous intruders aboard the HMS Apollyon has resulted in some very odd breeds, the most notable of these being the common Vic. 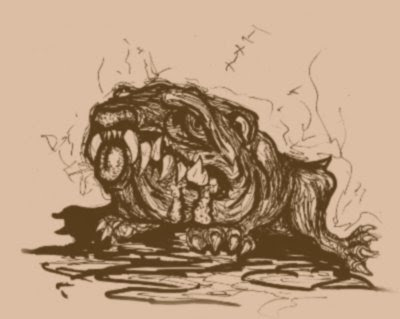 The ultimate "small vicious dog", employed by scavengers and other delvers as a trap mechanism, distraction, missile weapon and device to sow terror. The "Vic" is a highly hybridized dog, one that can actually be said to have been 'weaponized'.  Vics are some of the dumbest, slowest canines in existence, but they remain popular because they are tenacious, vicious, and pack the most amount of mayhem into the smallest package.  Vics are often carried by scavengers and thrown at enemies as a way to distract an enemy, facilitate escape, or thin the numbers of an attacking group.  They may also be used as traps. Most often held in sacks rigged to drop where the Vic is content to wait for up to several days if given a large bone to chew on.  There is little that will discourage pursuit more effectively than several snarling razor toothed curs dropping from above with the sole intent of sowing bloody ruin.

An average Vic is about a foot and a half in length, but the vast majority of their mass is made up of an oversized head, covered in thick wrinkles of skin and sporting a massive jaw - with neck muscles to match.  The legs of these dogs are almost vestigial and they can barely drag themselves along the like slugs, and quickly exhausted if not carried.  Luckily Vics are extremely placid if placed in a dark sack with something to gnaw on and will contentedly slumber for hours or days in this state.  Equally beneficial is the Vics' tendency to become psychotically aggressive when suddenly removed from a safe dark place.  When released and tossed at an enemy a Vic will invariably aim itself for the face and the throat of almost any creature they are set upon.  Once attached they attack with a single minded determination, gnawing and burrowing into the flesh of their victims.  Vics attack as 2HD creatures if thrown or on within 2' and will worm their way under or through most armor if given time.  They bite and tear with their proportionally huge jaws, often leaving a few of their serrated shark like teeth embedded in their victim.  This presents no problem for these dogs as their teeth grow in rows, a new set replacing the old every couple weeks.

Any round that a creature is successfully attacked by a Vic, the pain of tearing teeth and the distraction of 20lbs of squirming frenzied dog latched to an extremity or face makes retaliatory attack difficult, and all strikes are at -3.

The Vic is a specially bred dog that sells for anywhere between 25 - 50 GP (depending on HP) for an adult and 1-2GP for a puppy.  Raising Puppies to adulthood is tricky, as the hybridization that creates Vics also leaves them with a myriad of physical problems, deformities and susceptibility to numerous diseases.  There is only a 20% that even a well cared for puppy will reach adulthood in about 8 months.

NOTE: I like these horrible pitbulls in a bag - and would say they might be available in other fantasy environments.  I bet malicious yet magical fairy tale goblins would breed these things and I am sure they can be found fighting giant lizards in the gambling houses of the ASE's Certopisan Plain.  Vics would be game changers, except that it's hard to conceive of anyone carrying more than one or two 20lb dogs in sack, plus feed, on any kind of serious delve.  Of course the gate stewards of Stern Town have huge packs of these things to drop on invaders - it's just the sort of nasty, risk adverse thing that the remaining humans of the HMS Apollyon enjoy the most.
Posted by Gus L at 7:01 AM