The Obelisk, The Haunted Halls

THE OBELISK OF FORGOTTEN MEMORIES, AREA 9 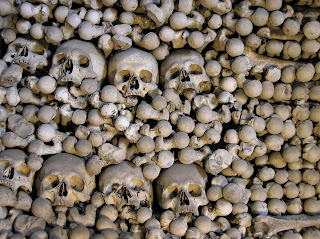 This series of rooms make up the ossuaries beneath the Sepulcher of Torpo the Cannibal, they can be reached most easily through the pits in the crypts (Areas 7e and 7f ) but may also be accessed through the trapdoor in the bottom of Torpo's bier.

9a.  Ensorcelled Ossuary
Directly beneath the Acolyte's Quarters (Area 7 f) there is a sturdy ladder going between the two areas.  A 30' high ceiling give the room a sense of majesty.  The chamber itself is simple, carved from stone with the walls rubbed smooth and filled with hundreds of niches.  Each niche is full of bones, much of the chamber is likewise stacked with lovingly arranged bones.  Some stacks go all the way to the ceiling and others are only a few feet tall.  Neat paths, edged by rows of skulls pass through the room, with one leading to the Southern door and another off to the side.  The entire space smells of rot and dusty air.

If the side path is followed it will lead to a massive stone tablet set in the wall. This tablet contains the spell "Skeletal Coryphees" carved in raised runes.  It has been carved in reverse so it cannot be read off the wall like a scroll, but a rubbing of the carving can be flipped and the spell copied.


This room also contains the rotted body of the priest of Delphina, an elderly cleric who died of a heart attack when the cultists invaded.  He's a white haired man wearing a blue robe stained by the process of decay, obviously laid to rest with care, in a space hollowed out from a bone stack.  In his hand he clutches a simple Holy symbol of Delphina made of a blue and white china shard wrapped in silver wire (Worth 30GP).  The symbol is sacred to Delphina, and if a cleric devoted to her, or even on good terms with her, uses it they can turn non-corporeal undead as if one level higher than their own.

If the Cult of Furter fears invasion it is likely that the door leading to the Pillared Hall (Area 8a.) is trapped, most likely with a poison needle placed to jab through the keyhole.

This spell is a weaker form of animate dead that allows the animation of 1D6 HD of skeletons, who will rise and do the casters bidding until the magic dissipates and they dissolve into a mist of bone dust.  The skeletons move in a languid and graceful manner (attack as 0 HD monsters) but are excellent dancers, moving with a hypnotic grace to any form of musical accompaniment. Casting the spell requires a handful of coins (10 CP) and a string stolen from a musician, both of which are consumed in the casting.

9b.  Chamber of Bones
Reached most easily by descending through the Sealed Crypt (Area 7e) this ossuary is a large room carved out of rock and with 30' ceilings.  Bones are scattered, knee deep in places, about the chamber.  Massive stacks of bones lean precariously over from all sides, and the chittering of corpses fleas appears to be everywhere within the chamber.

Corpse fleas have been using this ossuary as a source of bone to feed on, and there are alway 2D10 fleas from area 10 in this room.

Ladder Trap:
The ladder leading up to Area 7e is rickety and will break if over 150lbs attempts to climb or descend it.  A fall from the ladder will be approximately 20' do 2D6 damage and a save vs. breath weapons will allow the victim to avoid all damage by grabbing onto a functional wrung, this will also leave the victim stranded at the end of 10' of broken ladder, dangling into space.  Corpses fleas are capable of scrambling up this ladder at a rate of 1D3 per round, and up a rope at the rate of 1 a round.

Bone Piles Trap:
The stacks of bones in ossuary have been rooted through by corpse fleas and are no longer stable.  Anyone disturbing the stacks will cause them to fall over for 1D10 damage, and trapping the victim underneath a huge pile of bones (takes 1D4 turns to dig them out without causing additional bone stack collapses). Combat in the Chamber of Bones is also likely to disturb a stack and cause it to fall.  Each combatant over 75lbs should roll 1D10 per round and on a 1 they have dropped a hundred bones of old bones on themselves.


9c. The Undercrypt
Torpo's undercrypt may be accessed via an obvious trap door inside his bier, or more easily from the two sealed side doors.  The room is pitch black, with a low 6' ceiling, the decorative efforts of the rooms above are largely absent here with only some rude spirals carved into the massive stone supports that prevent collapse of the floor above.

Rather than create an undercrypt for his family's future use Torpo built this chamber to serve as a trophy room for the twisted tyrant's memory.  The desecrated bodies of his greatest enemies rest in decorative stone sarcophagi against the walls. Two (An and Bn) on the North wall and two (As and Bs) on the south wall.

Sarcophagi An -The is the final resting place of Melontax the Untameable, the Wizard who Torpo deposed and replaced in his youth.  The sarcophagus shows Melontax's horrible death by flaying and devouring performed personally by Torpo.  Inside is a leathery human skin rolled beneath a pile of gnawed bones.

Sarcophagi Bn - The Sasquatch Khan once ruled over all the forest between Denethix and the sea, and in the way of his people he was a peaceful and relied on subtle manipulations to keep the calm.  The Sasquatch were perhaps Torpo's greatest enemy and fought him for many years, allied with elves, men and even goblins.  Torpo was victorious at last and he captured the Sasquatch Khan in battle not far from the site of the Obelisk.  The Khan was taken in massive chains, tortured and finally locked within the Sarcophagus with an odd magical artifact that allowed him to live for several more humiliating and painful months.  The Sarcophagus, carved to depicted a screaming Sasquatch with a frog emerging from his throat contains the heavy chain laden bones of the Khan and thousands of tiny amphibian skeletons.  Within the tomb is also a strange metal bottle with lapis and jade inlays in a vaguely unsettling wave like pattern. The bottle is open and clogged with the crushed bones of tiny amphibians, a stopper rests next to.  If emptied it will be quickly revealed to be a Jeroboam of Ranine Abundance.
Sarcophagi As - The Brass Despoiler was once a self directing battle robot that Torpo slew in single combat when it emerged from its long stasis.  The Sarcophagus shows thier famous battle, which only ended when, both combatants, badly injured struggled in the dust and torpo was able to use he fearsome strength to tear the head of the armored robot.  The reliefs also show how Torpo had the Depsoiler's outer carapace fashioned into near indestructible armor.  The robot's large head now rests in the tomb, bashed and dented, with one optical unit shattered.  It's likely worth about 100 GP to the scientists, but even they have little use for the broken sensor unit of an insane hunter killer robot.

Sarcophagi Bs - Within this plain Sarcophagi are the the dessicated and skinned corpses of three small children.  The Three Princes were a triumvirate of wizards who fought Torpo's attempt to control the Certopsian.  The Sarcophagus depicts these battles, with Torpo leading his mostly human and werebeast troops against armies of strange looking moktars (if examined closely each moktar appears to have tentacles in place of eyes).  The Princes were not actually children, but extra-dimensional parasites that rode the bodies of children for their inscrutable purposes.  While the mummified bodies are completely dead, the parasitic aliens are not, and if the bodies touched by naked flesh, a tiny worm will (save by rolling under wisdom on a D20) bury itself in the flesh of anyone touching the bodies.  A save vs. poison will expel the worm, but a failure means that the victim's will is quickly overwhelmed by the alien parasite and within 1D10 days grey stalks will burst from the eyes and the victim's body will become nothing more than a host and vehicle for the strange life form, which can cast spells as a 5th level magic-user.  Prior to the complete transformation Remove Curse will kill the parasite, but the host will permanently lose 1D4 points of Int.

Jeroboam of Ranine Abundance These large (3' Tall) bottles are often made of hammered metal, but can be made of any substance.  They are magical, but not an especially useful items, as there sole power is to produce (either by spontaneous generation or relocation  from nearby ponds is unclear) 2D20 frogs and toads a day.  The device will produce these animals at random as long as there is space within. If capped it will fill with amphibians and then cease, the beast within remaining in some kind of stasis.  If open amphibians will crawl out and wander off if not corralled. The frogs and toads produced are perfectly normal, non-poisonous and can be eaten - generally providing enough meat to feed two humans every day.
Posted by Gus L at 9:42 PM

Email ThisBlogThis!Share to TwitterShare to FacebookShare to Pinterest
Labels: Obelisk