Images of the Apollyon

The Vessel is over a mile long and approximately a ½ mile from the tip of the five stacks to the keel. The internal volume of the vessel is approximately 900,000,000 cubic yards split into upwards of 54 decks 30 odd of which are now below the waterline, and 12 of which are above. Stern town is a sealed off portion of just 8 decks, including the rear port greenhouse and one of the rear port towers. Yet despite its limited size the town it has operating machine shops, a bazaar, farm, algae tanks, fish processing plant and living quarters.

The rest of the vessel is sadly abandoned, no stern dweller is known to have made it past amidships in two generations, and now more salvage expeditions are lost than return laden with treasures and supplies. 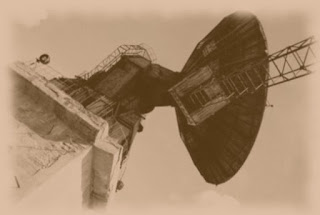 The port stern radio tower, topped with a massive dish and abandoned after it ceased to receive signals from the dead and dying world.  It can only be accessed by elevator from deck the deck 24 navigation control center, now choked with (edible) fungal growth. 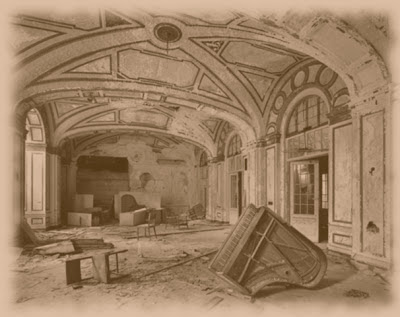 2nd class passengers had access to a few above deck luxuries including this grand ballroom.  It operated until only a few hundred years ago, when the diminishing number of 2nd class passengers made it necessary to eliminate the caste and enlist the remaining members into the crew.

Much talk persists of secret caches of preserved delicacies and liquor stashed in the area by the 2nd class stewards and passengers, before their failed efforts to resist enlistment. It is also rumored that, like so many above deck spaces the ballroom and attached parlors are now overrun by predatory avian monstrosities. 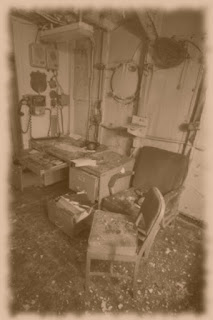 Spaces like this 2nd Steward's office have been abandoned and left to decay throughout the vessel.

Occasionally they hold valuable resources and equipment overlooked in more plentiful times or left behind when the spaces were abandoned do to violent incursion.

More often these spaces serve as lairs for revenants  and humanoid interlopers, with the grisly 'bloated feasters' from the flooded steerage decks especially taking perverse delight in occupying and destroying areas originally assigned to security crew such as the Stewards. 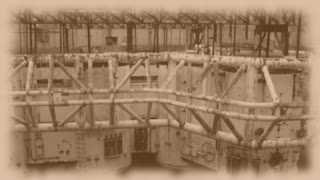 Below decks it is not uncommon to find rusting machinery of unknown purpose.  Some still hums with life and should be avoided due to it's inherent danger and automatic defenses.

Even moribund machines are often guarded by automaton servitors whose only allegiance are to the inscrutable goals of the central computer. 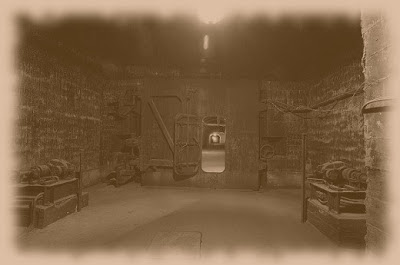 Much of the Apollyon's space is uninhabited and ghostly still.  Machine shops such as the one pictured, where every valuable tool was removed in the orderly retraction of civilization.

Many of these sterile areas are also the result of the central computer's tendency to seal off compartments for decades or centuries at a time, turning them into deserts and museums of past ages. 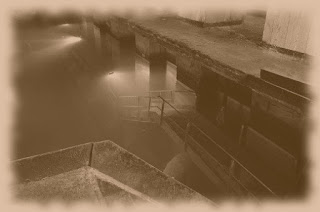 Every Scavenger has a tale of reaching the flooded decks, or finding a path formerly open suddenly filled with sea water. The waters of the ship generally teem with life, or unlife, and intruding into them is almost certain death.

Old Scavengers claim they can determine the nature of a flooded area's inhabitants by smelling or tasting the water, with the black, oily necromantic waters of steerage being particularly feared.

Note: all these images are from various abandoned buildings and vessels, mostly former soviet military sites.
Posted by Gus L at 10:35 AM