Lemon is the party's magician, but his skills at lobbing oil, palaver and quick thinking are what have made him most valuable so far. Polari is the language of carnies - in case you were wondering. 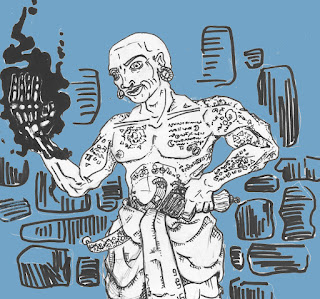 Alignment: Lawful, Lemon claims to live by an internal code, and is certainly more forgiving than many in the adventuring band.  It's unclear what rules exactly Lemon is following, and his alleged 'code' may be little more than an expression of his cheerful nature.  Still, Lemon tends to abide by social mores more than most magic-users and most adventurers.   Adventuring has taken a toll on Lemon's affability lately and he has become more withdrawn and colder.  Perhaps this is to be expected of all magicians as they grow in power, or perhaps it is the result of his dabbling with evil magics.

Lemon is a tall, well-built man of indeterminate age whose magical practice leads him to cover himself with tattoos in lieu of a traditional spell-book. Most notably he recently tattooed an evil extra-planar version of magic missile on the back of his left hand, a tattoo that persists in remaining red and angry looking, despite having fully healed.  Lemon is partial to the color yellow, which suggests that "Lemon" is an affectation and not his real name.  Lemon is a natural leader and will assume that role within any group he adventures with if possible.

Lemon's origin's are unclear, but his manner of dress and approach to spell casting suggest he is originally from the Vile Fens, where hoodoo magic is common, and practitioners quickly find themselves forcibly enlisted as zombie handlers in the Vile Woman's armies.  Prior to his abduction and joining the party Lemon spent time among traveling carnival players where he learned to throw knives and darts with dubious accuracy.  In the last few weeks he has acquired a large revolver and clearly enjoys both the ferocious aspect it lends to his appearance and the sound it makes firing.


Money appears to be of little interest to Lemon, as his needs are few.  He is searching for more spells, especially the strange and esoteric kind, but it is unclear if his ultimate goal is a Wizard's demesne, to sell his skills as a mercenary or simply to amass knowledge.
Posted by Gus L at 2:51 PM